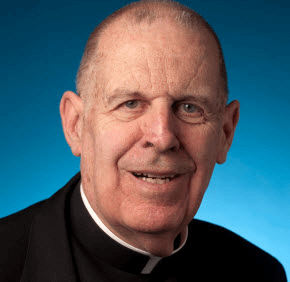 Sulpician Father Philip S. Keane, who taught moral theology and held administrative positions at St. Mary’s Seminary and University in Roland Park, died after a struggle with metastatic melanoma Dec. 28. He was 71.

A funeral Mass is expected to be offered Jan. 16 at St. Mary’s, followed by a burial in a Sulpician cemetery in Catonsville.

A native of Syracuse, N.Y., Father Keane was ordained a priest for the Diocese of Syracuse in 1967 and entered the Society of St. Sulpice in 1970.

In addition to teaching, Father Keane served as a spiritual director, formation adviser, dean of the school of theology and executive vice president during his tenure at St. Mary’s.

“He was a man of the church and dedicated to the formation of future priests,” Father Hurst said. “He had a marvelous sense of humor and was interested in many aspects of life, from sports to model train collecting.”

Father Keane served on the board of directors at Charlestown, an Erickson continuing care retirement community in Catonsville.

He earned a bachelor’s degree from St. Bernard’s Seminary in Rochester, N.Y., in 1963. He also earned a licentiate of sacred theology and a doctor of sacred theology, both from The Catholic University of America in Washington, D.C.

He taught at St. Michael’s College in Vermont; the former Marymount College in Los Angeles; the former sabbatical program for priests at the Vatican II Institute in Menlo Park, Calif.; and presented “The Roles of Academics and Intellectual Formation” session at the Institute for the Preparation of Seminary Formation Staff and Advisors at St. Patrick’s.

Father Keane was a member of the Society of Christian Ethics and the Catholic Theological Society of America.

Since 1978, Father Keane was sought after for his expertise as an ethicist by bishops and Catholic health care systems throughout the United States. He has published several books and articles on health care and ethics-related topics.