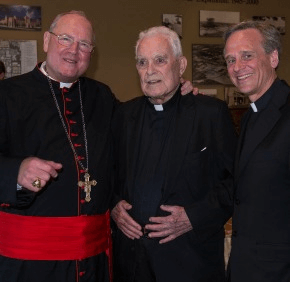 By Paul McMullen
pmcmullen@CatholicReview.org
Twitter: @ReviewMcMullen
Whether it was chairing hearings on segregated housing or opening his office to a young principal-to-be, Holy Cross Father Theodore M. Hesburgh had considerable influence that was felt in Baltimore and among local Catholics.
The longest-serving president of the University of Notre Dame in South Bend, Ind., died Feb. 26, at age 97. In the midst of transforming what was perceived as a football factory into one of the nation’s most highly-regarded academic centers, Father Hesburgh’s role as a civil rights leader brought him to Baltimore.
When the U.S. Commission on Civil Rights was created in 1957, Father Hesburgh was a charter member. He chaired the body from 1969 until 1972, when, according to Catholic News Service, President Richard Nixon dismissed him over his criticism of the administration’s civil rights record.
That dismissal came two years after Father Hesburgh chaired federal hearings that addressed the lack of public housing in Baltimore County. Spiro Agnew, Nixon’s vice president until his 1973 resignation, had been the county executive from 1962 to 1966.
Related article: Father Theodore Hesburgh, education leader, diplomat dies at 97
As the Catholic Review reported in its Aug. 21, 1970 issue, paraphrasing Father Hesburgh, “There are no separate black and white markets for cars or television sets, but, he (Father Hesburgh) said at one session, there still seem to be separate black and white housing markets in the Baltimore area, with little being done to break down the barriers.”
The hearings were conducted at the Social Security Administration headquarters in Baltimore, where Father Hesburgh told the Review that Cardinal Lawrence Shehan, then-archbishop of Baltimore, “was very strong on essential principles” regarding civil rights.
After his ordination in 1943, Father Hesburgh told the Review, while studying at The Catholic University of America in Washington, D.C., he spent a summer serving St. Patrick’s Church in Washington, when Cardinal Shehan was its pastor.
Jim Sellinger, chancellor of education for the Archdiocese of Baltimore, is among the legion of Notre Dame graduates in the area. He recalled Father Hesburgh’s friendship with his late uncle, Jesuit Father Joseph Sellinger, who was president of what is now Loyola University Maryland in Baltimore from 1964 to 1993.
Jesuit Father Brian Linnane, the Loyola president since 2005, said, “Father Hesburgh challenged the idea that Catholic universities were not hubs of intellectualism.”
Fatter Linnane met Father Hesburgh in 1990, when he was a graduate student at Yale University in New Haven, Conn., and the Notre Dame president met with active supporters of the Catholic chapel and center at Yale, named for St. Thomas More.
“What I found fascinating was that he was able to make a meaningful connection between anyone he met and the University of Notre Dame,” Father Linnane said. “He knew I was a Jesuit, and said that he wanted to make Notre Dame not only an athletics powerhouse but an academic powerhouse.
“Strengthening the theology department was crucial, he said, and told me that he would have to lean on the Jesuits to make (it) world class. It was very gracious.”
Dr. Thomas Powell, president of Mount St. Mary’s University in Emmitsburg, said that “a lot of his (Father Hesburgh’s) writings have guided what I try to do here.”
Casey Buckstaff, the principal of Monsignor Slade Catholic School in Glen Burnie, was in the class of 2002 at Notre Dame. Her senior thesis, on Catholic religious in the civil rights movement, took her to Father Hesburgh’s office, in the library that bears his name.
“My great aunt, Sister Florus Castle (a Sinsinawa Dominican), said I should call him up,” Buckstaff said. “He graciously agreed to meet me. He spoke eloquently, like the storyteller he always was at Mass and events. Father Hesburgh has always been an iconic figure, yet he focused on staying connected to the students at Notre Dame.”
Also see:
Politicians call for coalition airstrikes to help Syrian Christians
Shroud of Turin helps deepen faith
Staff writer Erik Zygmont contributed to this article.
PrevNext