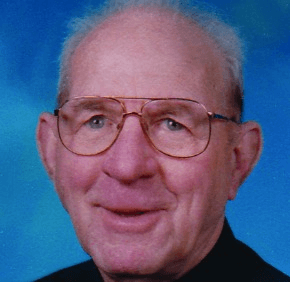 Jesuit Father Edgar Graham, a Baltimore native who taught and ministered in India, is remembered as a priest who could be both friend and taskmaster.

Father Graham died Feb. 1, at age 92. A funeral Mass was offered Feb. 6 at Immaculate Heart of Mary in Baynesville, where he had celebrated Mass for more than two decades, starting approximately in 1985, when he returned to the U.S. after more than 30 years in India.

Jesuit Father Joseph Lacey, pastor of St. Alphonsus Rodriguez in Woodstock, met Father Graham in the mid-1960s, when the former joined the faculty at a Jesuit school in Jamshedpur, India. Father Lacey gave the homily at Father Graham’s funeral Mass, which he shared with the Catholic Review.

“I was just a young scholastic and Ed was my confessor,” Father Lacey said in his homily. “My first Lent in India I asked whether I could be dispensed from fasting and he responded, ‘No, it’ll do you good.’

“Ed never backed away from a difficult job and he scrupulously and exactly accomplished every task, whether as a math teacher or a treasurer.”

Born in 1923 in Baltimore, Father Graham was baptized at Holy Cross Parish. He graduated from what is now Loyola Blakefield in 1941. According to the Jesuits’ Maryland Province, he bagan his college studies at what is now Loyola University Maryland, finished at Novitiate of St. Isaac Jogues in Wernersville, Pa., and studied philosophy at the former Woodstock College. He pronounced his first vows in 1944, and was ordained in 1955.

He actively sought a missionary assignment in India, where he taught math, English, science and ethics in Jamshedpur, Chiabasa and Jealgora. While in India, he studied at Loyola in Jamshedpur and De Nobili College in Poona, and immersed himself in local customs and ways.

Father Lacey recalled him overseeing the construction of a Jesuit hostel, and befriending the contractor and laborers.

“He invited me to join him for dinner with the family of one of the Muslim bricklayers who lived across the river in Mango,” Father Lacey said. “When we entered the house Ed observed the Muslim customs and rituals of the family. The strength of those relationships was as important to him as the stability of his building.”

Father Lacey said he often went with Father Graham when his friend went out to celebrate Hindi Masses in the homes of Catholics in the area.

“He was gracious and warm, sensitive and respectful of the culture of the people,” Father Lacey remembered.

After he returned to Baltimore, Father Graham served as an assistant chaplain of Good Samaritan Hospital and as house treasurer for his college alma mater, what is now Loyola University Maryland. In 2008, he moved to Manresa Hall in Philadelphia, Pa.