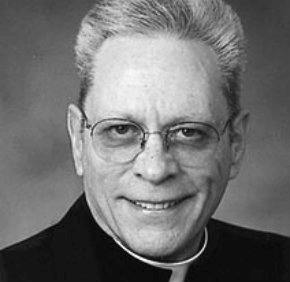 By George P. Matysek Jr.
gmatysek@CatholicReview.org
Father John T. Carter, a Baltimore-born priest whose ministry took him to the skies and seas in service of his country and church, died Dec. 10. He was 71.
Raised in St. Ambrose Parish in Park Heights, Father Carter was inspired to become a priest after reading Maryknoll Magazine as a teen. He received a bachelor’s degree from Maryknoll College Seminary in Illinois with the intention of becoming a Maryknoll missionary. He altered course, however, and decided to become an archdiocesan priest. After studying at St. Mary’s Seminary in Roland Park, he was ordained in 1970.
After completing military chaplaincy training at the Naval Station at Newport, R.I.., and Parris Island, Father Carter served as a circuit chaplain at the Naval Air Station in Norfolk beginning in 1979. He ministered as a Navy chaplain from 1981 to 1998, with assignments including stints in Japan, the Philippines, Bermuda and Cuba, where he served 2,000 Cuban and Haitian refugees in 1995.
In a 2006 interview with the Catholic Review at the time of his retirement due to cancer surgery, Father Carter recalled serving on a ship in the Persian Gulf during the Iran-Iraq War. His job was to keep sailors calm, he said.
“We spent 12 arduous months drifting around, monitoring the situation,” Father Carter said. “We couldn’t leave the ship, and it was difficult being at sea. I think my presence was a help to the men.”
As chaplain, Father Carter flew from ship to ship on a helicopter nicknamed the “Holy Helio.” He was awarded three Meritorious Service Medals, a Joint Service Commendation Medal, a Humanitarian Service Medal, the Navy Expeditionary Medal and the National Defense Medal.
“As a priest, I was exempt from joining the service,” Father Carter said, “but I thought I should serve my country, and that’s what I did.”
Within the Archdiocese of Baltimore, Father Carter was an associate pastor of St. Clare in Essex 1970-71; Our Lady of Perpetual Help in Woodlawn 1971-72; St. Philip Neri in Linthicum Heights 1972-76; St. Louis in Clarksville 1979-81; and Church of the Immaculate Conception in Towson 1998-2001.
Father Carter was pastor of St. Augustine in Williamsport and St. James in Boonsboro, 2001-2006. He oversaw renovations to buildings at both parishes, and he helped celebrate the 150th anniversary of St. Augustine in 2001.
Suzi Rickard, St. Augustine’s administrative assistant, recalled that when Father Carter first arrived at the parish, she didn’t know what to make of the military man with a crew cut who “stomped in” to the parish offices.
“I didn’t know whether to salute him or make the sign of the cross,” Rickard remembered with a laugh. “But, he turned out to be the most delightful, wonderful person. He was always happy.”
Rickard noted that the pastor had a generous heart and would often take people out to dinner. He was also a pastoral man, comforting Rickard’s family and bringing holy Communion when Rickard’s husband, Jim, was dying of a brain tumor.
“As sick as he was himself,” Rickard said, “he remembered us.”
Ray Bielicki, a former pastoral council president at St. Augustine, called Father Carter a gifted homilist.
“He shot you with a spiritual message that stuck with you long after the Sunday services,” Bielicki said.
Father Carter maintained an “extraordinary” collection of miniature lighthouses, Bielicki said, which he displayed in the rectory. On his retirement to Mercy Ridge Retirement Community in Timonium, the pastor gave away many of the lighthouses to parishioners.
Bishop Mitchell T. Rozanski offered a funeral Mass Dec. 16 at St. Augustine.
Also see:
Listen to the choirs at St. Mary’s Church in Annapolis
Blog: Let’s not forget the rosary
PrevNext