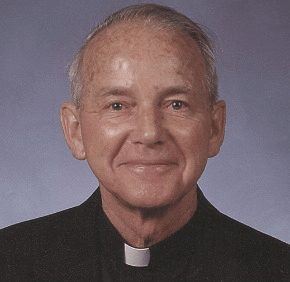 Father Brendan T. Carr, whose leadership enriched parishes in Curtis Bay and Glen Burnie and whose gentle nature extended to his pets and all animals, died Jan. 11.

Father Carr, 82, had been fighting pulmonary issues, according to his best friend, Father Thomas Ryan, the chaplain of Archbishop Spalding High School in Severn.

“A Spalding couple who knew him from his days in Glen Burnie put it best,” Father Ryan said. “They said, ‘He was one of us, as opposed to being on a pedestal.’ He had a common sense, meat-and-potatoes approach, and people felt accepted by him.”

Father Carr was a Pittsburgh native. According to his brother, Vince, he worked at a grocery store and bingo hall to pay his way through his two years at Central Catholic High School. He was taught there by the Christian Brothers, and entered their novitiate in Beltsville eight days after his high school graduation.

Taking his final vows as a Christian Brother in 1957, he taught for 15 years, in Canton, Ohio; Pittsburgh; Philadelphia; Orange, N.J.; Miami; and finally at Calvert Hall College in Towson, where he taught multiple languages and over eight years was moderator of six different athletic teams.

Father Ryan joined the Calvert Hall teaching staff in 1967 as a Christian Brother. He said it was not a coincidence that he followed Father Carr into the priesthood.

“He was a good mentor,” Father Ryan said.

Father Carr studied for the priesthood at St. Mary’s Seminary in Baltimore. Ordained a priest for the archdiocese in 1971, he served brief stints at Sacred Heart Parish in Glyndon; St. Francis of Assisi in Baltimore; Stella Maris; and St. Clement I in Lansdowne.

After four-plus years at St. Thomas More Parish in Baltimore and two at St. Dominic in Hamilton, he became a pastor for the first time in 1983, at St. Athanasius in Curtis Bay.

A book celebrating the parish’s centennial in 1991 referenced the challenges he faced.

“As soon as Father Carr arrived,” the book reported, “he received a notice from the city to clean up the property. … Father responded by asking for help from the parish and doing much of the work himself.”

He was credited with instituting ethnic celebrations and raising environmental awareness in a community known for its industrial waterfront.

He served as an administrator of St. Patrick in Mount Savage from July 1994 to December 1995, when he became pastor of Church of the Crucifixion in Glen Burnie. In February 2000, Father Carr became associate pastor of Holy Trinity Parish in Glen Burnie, and continued to serve weekends there after formally retiring in November 2005.

“Everyone loved him,” said Kathi Hiett, the music director and organist at Holy Trinity Parish since 1990. “He was not in any rush to start Mass; he would walk the aisles beforehand, schmooze with people and wave to them. He was a people’s priest.”

Hiett recalled Father Carr as a regular along the Baltimore & Annapolis bike trail with his yellow Lab, Damien.

“When it rained, he put a yellow slicker and booties on Damien,” she said. “When my black Lab needed surgery, Father Brendan came to the house and blessed him. One year, I had squirrels in my bird feeder, and used a pellet gun. He never forgot that, and for Christmas this year, sent a squirrel-proof bird feeder to my house.”

Hiett said that Father Carr “loved” weddings and baptisms, and “that there wasn’t a Mass he didn’t celebrate that didn’t include the Malotte’s (sung) Lord’s Prayer.”

“It will be a great honor,” she said, “to play that at his funeral Mass.”