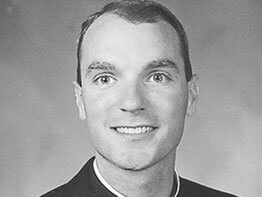 Parishioners of Holy Trinity, Glen Burnie, got a special treat during Mass May 11, when George and Maureen Parker, parents of Father Adam Parker, delivered a talk about the sacrament of holy orders.

Father Parker, who serves as secretary to Archbishop Edwin F. O’Brien, celebrated the Mass, which fell on both Pentecost Sunday and Mother’s Day.

Mr. Parker recalled the day when his son, a freshman at Virginia Tech, informed him of his intention to seek the priesthood. At the time, Mr. Parker said the thought of the priesthood as being a somewhat “lonely life.”

Since his son was ordained in 2000, he said he gets “great satisfaction seeing his (son’s) happiness being a priest.”

Mrs. Parker remembered a child who, when young, was the “noisiest and most disruptive of all the children at Mass” and who then grew into a “typical teenager.” She also reflected on the fact that she had prayed for vocations almost daily, never guessing that one day her own son would be called to the priesthood.

Mr. Parker asked the parents in attendance to “be open to the possibility of one of your sons or daughters being called” to a vocation, while Mrs. Parker said, “I experience his vocation as a blessing for the entire family.”

Heather Chisholm, who was holding her 1-year-old son, Brandon, said, “It was refreshing to hear that it’s not a lonely lifestyle.

“I’d definitely feel more comfortable now if he did decide to go into the priesthood, though I don’t know if I’d go out of my way to encourage him.”

Striking a similar note was Nicole Stumpf, who attended Mass with her husband, John, and son, John IV.

“It’d be wonderful, if that was the route he wanted to take,” she said.

As to how she might introduce her young son to vocations, Mrs. Stumpf said, “Just bring him up Catholic and support him if that was the way he wanted to go.”

Parishioner Janice Harrison said that she was “moved by the fact that Mrs. Parker was praying for vocations, and then unexpectedly her son decided to become a priest.”

When Father Parker heard that his parents would be speaking at Holy Trinity, he arranged with Father J. Bruce Jarboe, the parish pastor, to celebrate the Masses.

Joe and Nancy Little, parents of seminarian Chris Little, were also asked by Father Gerard Francik, director of vocations for the Archdiocese of Baltimore, to speak at weekend Masses at Holy Trinity.

Mrs. Little, who, along with her husband, was to speak at the noon Mass on May 11 said, “We just hope that everyone will be open to hearing about vocations and the blessings God has in store for us.”