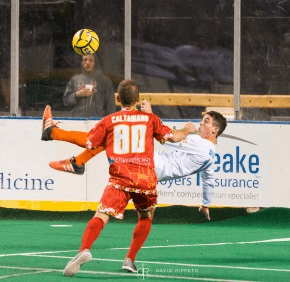 By Paul McMullen
pmcmullen@CatholicReview.org
Twitter: @ReviewMcMullen
Archbishop William E. Lori will compound the Catholic feel of the Baltimore Blast Feb. 17, when he adds his presence to an Archdiocese of Baltimore Family Night being held by the indoor soccer team.
Their Major Arena Soccer League game against Syracuse at Royal Farms Arena kicks off at 7:35 p.m. Starting at 5:45, fans will have the opportunity to meet and greet Archbishop Lori and Blast players. Youths can then join a “parade of champions” during opening ceremonies.
Every ticket order for the game will include one free youth ticket, for children in the eighth grade and younger. Additional tickets are discounted at $17.
Kevin Healey, the president and general manager, and former coach of the franchise that has won eight championships, told the Catholic Review that 40 percent of the Blast’s roster is Catholic.

That includes William Vanzela, a goalkeeper from Brazil; Jereme Raley, who went from St. Mary’s Ryken High School in Leonardtown to the University of Maryland; Healey’s son, Pat, a veteran all-star defender; and Geaton Caltabiano.
Caltabiano was raised in southern Anne Arundel County and attended a parish school in Prince George’s County, but made the long daily trek to attend Mount St. Joseph High School in Baltimore.
“My father (Nello) went there, and both of my older brothers, Vincent and Marco, went there,” Caltabiano said. “The length of the drive was crazy, but it’s our family school.”
Caltabiano, who also coaches interscholastic and youth teams, points to Mike St. Martin, his coach at Mount St. Joseph, as a major influence in his life.
“He prepared me for everything that I am doing today,” said Caltabiano, who has a psychology degree from UMBC. “In addition coaching us on the field, Mike was a great mentor off it. He really helped me prepare for college, and he’s the reason I got into coaching.”
Kevin Healey, the president-GM, and his son, Pat, are parishioners of St. Margaret in Bel Air. Both played for Calvert Hall College High School.
Kevin Healey played for what was then Loyola College. In 1976, when the Greyhounds won the NCAA Division II championship, his teammates included Caltabiano’s father, Nello.
For ticket information, email mconway@baltimoreblast.com or call 410-558-4292.

Coffee & Doughnuts with Pat Healey of the Baltimore Blast
PrevNext