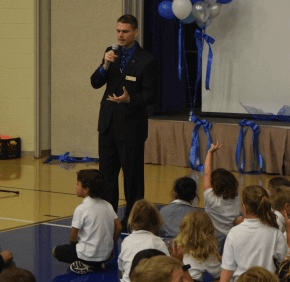 By Paul McMullen
pmcmullen@CatholicReview.org
Twitter: @ReviewMcMullen
ELLICOTT CITY – Catholic education on the campus of Our Lady of Perpetual Help Parish began in 1879, but it is a fitful history, with openings, closings and a 30-year gap that encompassed the two World Wars.
The latest reboot of Our Lady of Perpetual Help School, however, has earned national recognition.
It was one of 329 schools named a Blue Ribbon School of Excellence Sept. 28 by the U.S. Department of Education, the highest academic honor bestowed upon a school by the U.S. government. It recognizes public and private elementary, middle and high schools that are “either academically superior or that demonstrate dramatic gains in student achievement to high levels.”
In a way, OLPH School’s application was in the works before the youngest of its 210 students, those in pre-kindergarten for 4-year-olds, were born.

Kindergarteners at Our Lady of Perpetual Help School in Ellicott City practice their penmanship on iPads Sept. 28, when the school was named a National Blue Ribbon School of Excellence. (Maureen Cromer | CR Staff)

Florence Hahner, the academic dean, is in her 21st year on the staff of OLPH School. Patty Weir, in her 16th, directs the Marian Program, which serves 22 students with “diagnosed language-based learning differences and math difficulties.” It was begun under the leadership of Nancy Malloy, now the acting principal of St. Augustine School in nearby Elkridge.
Victor Pellechia became principal in 2012. He created a Lego club and robotics team, but more importantly, transformed a corner of the lunch room into an interactive learning center (ILC) that has become a hub.
“What makes OLPH School special?” Pellechia asked the entire school community assembled in its gymnasium for the NCAA basketball Selection Sunday-style roll call announcement of the Blue Ribbon winners. “No. 1, we’re always trying something new, we’re innovative.”
A $65,000 grant from the Knott Foundation allowed OLPH School to create the ILC in 2013. Another Knott Foundation grant, of $36,000, allowed the school to institute a 1:1 Chromebook program for grades 3-8.

“First,’ Pellechia said, “we had to get the bricks (infrastructure) in place. Then, we had to get the devices.”
Children in grades 6-8 are supplied their own Chromebook computer for the school year. Students in the lower grades grab one from a cart on a daily basis.
“All the books we’re using are online,” Hahner said. “Teachers can monitor and comment in real time on what the students do individually and in groups. It allows us to differentiate learning, lets the students become independent learners.”
To that end, students in grades 3-5 have a schedule more in tune with a middle-schooler; they work with multiple instructors and at an appropriate pace.
“The teachers have gotten on the bus with me,” Pellechia said. “If a teacher is passionate about science, let’s utilize that strength.”
There are, however, no specialists. Martina Kerns, the physical education teacher, is involved in Drama and runs the after-care program. Hahner compiles the schedule and teaches math, to two groups in the sixth grade and two in the seventh. Weir heads the testing center and promotes a collaborative culture.
“She’s a tremendous resource for every teacher here, we can go to Patty with anything,” said Hahner, who referenced the words of a volunteer tutor in the Marian Program: “Anything you can do to help one student, helps all students.”
Parents volunteer 30 hours a year; as many as 60 fan out across the 20-acre campus for Field Day in May.
Teachers donate their talents to an auction at the major school fundraiser, a spring bull roast. Laura Errera, the kindergarten teacher, brought in approximately $800 for her item: a bedtime story for the children in the home of the highest bidder.
Going above and beyond is a given in Howard County, where the public schools produce some of the best standardized test scores in the state and all five Catholic schools have earned the Blue Ribbon award.
“There is great competition here,” acknowledged Father Erik Arnold, the pastor of Our Lady of Perpetual Help.
He usually celebrates the weekly Mass for students, in a church a few steps from the school. Classrooms are identified not just by number, but with the name of a saint. “Heart, Mind and Soul” is the theme of the current school year.
“We’re not just passing along information to the children,” Father Arnold said. “It’s up to the entire parish to communicate the Gospel message to them – not just to the mind, but to the soul. We are communicating a way of living.”
Older students are part of that charge to convey the Holy Spirit, as eighth-graders partner with kindergartners in the “Buddy Program,” which this year will include a joint field trip to Port Discovery in Baltimore.
A familiar, family feel ranges from third-grade teacher Maria Procopio, a graduate of OLPH School; to second-grade teacher Alexis Baldwin, who has a grandchild enrolled; to Weir, who sent her three children there, to Hahner, whose very good week will conclude with the Oct. 1 marriage of her son, Patrick.
“He went to school here, with one of his groomsmen, Tim McCormack,” Hahner said. “It’s that kind of place.”
See also:
Ellicott City, Fullerton parish schools earn national Blue Ribbon award
Benefit for Catholic education raises spirits, $800,000
PrevNext