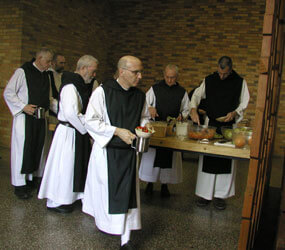 TRAPPIST, Ky. – Since the 1940s when acclaimed writer and contemplative Father Thomas Merton drew the world’s attention to the Trappists’ Abbey of Gethsemani in Nelson County, men have come from around the world to join in its ritual life of prayer and work.

Father Merton died in 1968, and in the wake of his death, that interest has gradually waned.

Now, for the first time in its modern history, the Abbey of Gethsemani is working to promote vocations to monastic life. And it’s joining with other communities of monks and nuns to produce a coordinated campaign.

Gethsemani is home to one of the largest Trappist communities in the United States. The monks there are working with 16 other Trappists communities around the country to educate people about monastic life and, perhaps, attract some people to such a life.

Representatives of 16 of these communities met in March at Holy Spirit Abbey in Conyers, Ga. – near Atlanta – to coordinate their efforts.

Trappist Father Alberic Farbolin, a monk at the New Melleray Abbey in Peosta, Iowa, organized the meeting in Conyers in his role as the U.S. regional secretary for formation and vocations.

The vocation campaign, he said, will meet some challenges but also will offer opportunities to reach people in ways the communities couldn’t on their own.

“The Cistercian monks and nuns in the U.S. have traditionally sought to promote vocations locally, each house going its own way,” he noted in an interview conducted by email with The Record, newspaper of the Archdiocese of Louisville.

The meeting in Conyers, generated “a good bit of energy and excitement,” he said. “A number of interesting ideas surfaced at the meeting which I am now in the process of trying to implement.”

Among their first fruits is the website www.trappists.org. It includes a listing of all the communities in the United States, information about visiting the communities, writings from “a monk’s diary” and “a nun’s diary,” and a question and answer section.

It serves “to engage and communicate with young adults on the Internet – hoping to share with them an impression of who we are. It’s also a means to easily connect inquirers with those monks and nuns who are assigned and trained to work with them in discernment.”

“Our goal,” he said, “is not to attract thousands to the website, but to engage that very small group whom God might be calling to live in this very unique and beautiful way.”

The Trappists hope to convey something about their lives, too, in the form of a DVD that’s being planned. And they plan to raise awareness about their monasteries with a full-page ad in the vocations magazine, VISION Vocation Guide.

Father Farbolin said the communities of Trappists in the United States range from about 10 members to 65.

The Abbey of Gethsemani, founded by a group of Trappists from France in 1848, is home to 50 monks.

The abbey saw its peak in membership, with 270 monks, in 1955. The youngest monk there today is 44. The eldest is Brother Camillus, 86, who’s lived in the community for 71 years. Three men joined the monastery in 2010.

Father Farbolin said New Melleray Abbey, where he serves, has seen a “falling off of inquiries” over the last 30 or so years. Those who have come “tend to be more mature, with careers behind them and a good bit of life experience.”

“The diversity of their backgrounds, nationalities, personal philosophies and family situations is really astonishing,” he noted. “‘Diversity’ is a good single descriptor for the state of our initial formation programs these days.”

The abbey at New Melleray will see two men make solemn professions this summer, said Father Farbolin. An account of this process can be found in the “monk’s diary” section of the website under April 6.

Others who are in discernment with the Iowa abbey include a microbiologist who became a hermit and a man who studied law with President Barack Obama, he said.

Such diversity is a hallmark, these days, of the Abbey of Gethsemani, too, said Brother Armour.

A few of the monks came to the monastery from Kentucky, he said, but the majority came from all over the United States and the world, including, Ohio, New York, New England, Texas, Peru, Vietnam, the Philippines and Canada. Their ages, backgrounds and talents vary widely, too.

Brother Armour, whose service as choir master at the abbey taps his skills as a musician, came from New York nearly 40 years ago.

“When I came as an aspirant, I was shown great care. I have indelible memories,” he said. “Now I’m in this chair (as vocation director); the roles are reversed. I take that role seriously and thankfully.”

He said he’s also prepared to find new ways of doing his job and adapting to the needs of young people.

During the conference in Conyers, the vocation directors discussed some characteristics of today’s young Catholics. Some of their attributes will fit well with monastic life, while others will make engaging them a challenge, said Brother Armour.

Young Catholics today tend to “value community, they need to feel welcomed by church and religious congregations,” he said. “We need to extend a welcome.”