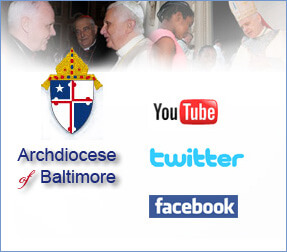 “The Archdiocese of Baltimore has added you as a friend.”

The archdiocese recently opened accounts on all three sites in an effort to extend its evangelization reach.

“Our goal is to use them at least once a day,” said Sean Caine, the archdiocese’s director of communications, of Facebook and Twitter.

Facebook was once the country’s No. 2 social networking site behind MySpace and largely limited to college students in its infancy.

The site’s owners opened the floodgates for anyone over the age of 13 in recent years, making it the virtual home for millions, ranging from high school students to 61-year-old grandmothers.

Facebook claims 250 million active users, including 120 million who check their account each day. Two-thirds of users are not in college, with people 35 and older comprising the fastest-rising demographic.

“For me, the primary goal is to be there because that’s where people are,” Caine said. “They make it easy for organizations to have a presence there that doesn’t compromise some of our concerns about inappropriate content.”

A Facebook page shares basic information like hometown or a birthday and also allows people to upload photos and videos. People can grow their network of “friends” by adding people they know.

Perhaps the most popular feature is the word-driven “status update,” which allows “friends” to see what others are feeling or doing at that moment.

“They give us the ability to communicate quickly and to reach large number of people we normally wouldn’t have access to,” Caine said. “It makes the church relevant for those people and allows us to respond quickly to evolving stories.”

Organizations that have Facebook pages have “fans” rather than “friends.” Despite no promotion, the archdiocese had 129 fans as of July 23.

“We use both of them to drive people to our Web site, where we can communicate in greater detail and greater length,” Caine said. “The (official) Web site continues to be the cornerstone of our Web-based communication.”

In June alone, there were 2.5 million hits to the official site and 25,000 unique visitors. That’s a dramatic spike in interest for the site, which had 10 million hits in 2008.

William Glover, the archdiocese’s chief information officer, said Facebook provides free marketing to the 510,000 Catholics in the archdiocese, and beyond.

“I think there is an untapped potential to share the good news of the church, to dispel concerns or to correct information,” Glover said. “It really is a way to reach out, to identify people and to create a community … in a time and place where life can be so hectic.”

To tie in with the Year for Priests, the archdiocese of Baltimore has been filming interviews with young people as they talk about a priest who has impacted their lives. A new video is posted weekly, on both YouTube and www.archbalt.org.

“These kids are talking about their priest in positive, glowing and happy terms,” said Scott Miller, the archdiocese’s coordinator for adolescent faith formation who conducts the interviews. “I watch some of the videos and I think as a young person, I have to give this (following a vocational call) some consideration.”

The weekend of Aug. 1-2 will feature an archdiocese-wide parish collection for the Catholic Communications Campaign. The archdiocese used the money from last year’s campaign to fund television and radio commercials featuring Archbishop Edwin F. O’Brien discussing the church’s many programs.

“It’s strictly an evangelization tool,” Caine said of the advertisements. “It’s a way of reaching people through means other than the traditional – in our schools, churches, from the pulpit and through The Catholic Review.”

The archdiocese also used television, radio billboards and Baltimore City buses on “The Light is on for You” campaign, which promoted the sacrament of reconciliation. Caine said more than 8,200 people came for confessions during the promoted Lenten season.

“It was successful in terms of giving us a foray into what has previously been uncharted, secular territory for us,” Caine said.