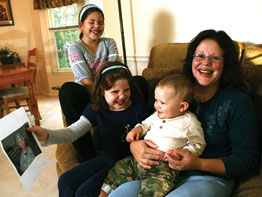 As soon as his older sister showed 8-month-old Ian Wood a printed photo of their father dressed in tan camouflage and a matching floppy hat, the chubby baby smiled and giggled knowingly. Wearing a miniature pair of camouflage pants just like his dad, the elated youngster reached for the photo and touched it gently near the same spot his father had printed the words, “I love you all!”

“He smiles when his dad calls from Iraq,” said Jennifer Wood, Ian’s mother and wife of Father Tyson Wood, a former Lutheran minister who converted to Catholicism and became one of two married priests in the Archdiocese of Baltimore. Father Wood, a U.S. Army major, has been stationed at Camp Victory near Baghdad since the summer, working as a military chaplain.

“I hold the phone up to Ian’s ear and he just smiles,” Mrs. Wood said. “He loves to hear his voice.”

Life for Catholic military families like the Woods hasn’t been easy in the years since the Sept. 11 terrorist attacks and the U.S. engagements in Afghanistan and Iraq. Separation from loved ones causes anxiety while those left behind must carry on with everyday life. Yet their Catholic faith and the prayers of fellow parishioners are often sources of support – helping them get through the inevitable trials of war.

Not only does Mrs. Wood have a baby to care for, but she also watches two daughters, Emily, 9, and Casey, 6. They can’t help but worry about Father Wood – especially after a roadside bomb exploded near him during his first ground convey. No one was hurt, but the incident was a reminder of the ever-present danger of terrorist attacks.

“It’s been scary,” said Mrs. Wood, balancing Ian on her lap. “Some of the hardest days are birthdays or other special days when he can’t be here with us.”

Emily and Casey help their mom by changing diapers. Neighbors are also quick to lend support, according to Mrs. Wood. Both girls said they write letters to their dad telling him how much they love and miss him.

“When I think about him, I want to cry – but I don’t,” said Casey, who cherishes her father’s e-mail messages and telephone calls.

Wearing a pink and gray shirt emblazoned with “Daddy’s Girl” on the front, Emily said she’s very proud of her father’s work supporting the troops.

“I think it’s important that he’s there for all the people teaching them about God,” she said.

Speaking in a Columbia home filled with religious images, Mrs. Wood said her family is encouraged by fellow parishioners at Our Lady of Peace at Fort George G. Meade in Anne Arundel County.

“Everyone tells me how they’re praying for us,” said Mrs. Wood, who even received a telephone call from Archbishop Edwin F. O’Brien, Baltimore’s new spiritual shepherd and the former head of the U.S. Archdiocese for Military Services.

Joan Carroll, a parishioner of St. Joseph in Emmitsburg, said she goes to daily Mass at the National Shrine Grotto of Lourdes in Emmitsburg to keep strong as her husband, Jonathan Carroll, serves in the Army National Guard in Iraq, and her son, Sean Reardon, serves as an Army specialist in Afghanistan.

“God has given me the grace to get through this year,” said Mrs. Carroll, noting that her 24-year-old son is “in the thick of things” fighting the Taliban.

“Every day, you really take for granted the time you have together physically,” said Mrs. Carroll, who expects that both her husband and son may be able to visit her in February. “Now, you are living life trying to capture them on video and pictures. It gets lonely.”

Being separated from her husband is an equal challenge for Kelly Adams, a parishioner of St. Rose of Lima in Brooklyn. Ever since Mike Adams was called to active duty with the Army National Guard in April and was sent to Iraq, Mrs. Adams said she is essentially acting as a single parent caring for their three children: Kirsten, 12, Karigan, 7, and Michael, 3.

Before he left, Mr. Adams purchased journals for himself and his daughters. He is writing about his experiences in the desert and the daughters are chronicling their lives on the home front.

Mr. Adams sent St. Rose of Lima School, his children’s school, an American flag that flew over Baghdad on Aug. 28. The Adams children raised the flag at their school for the first time on Oct. 19. It is now being raised and lowered by St. Rose students every day at the beginning and close of the school day.

“He wanted to honor St. Rose for being so supportive,” said Mrs. Adams, remembering how St. Rose students sent care packages to her husband and offered their prayers.

“That flag means a lot to Mike,” she said.

Many of the Catholic military families who spoke with The Catholic Review said they believe strongly in the American presence in Iraq and Afghanistan. They are troubled by protestors whom they believe have made it more dangerous for their loved ones.

“My husband believes he is making a difference in the lives of the Iraqi people,” said Mrs. Adams, “so their children can grow up in peace just like mine.”

While she respects the right to dissent, Mrs. Adams said protesting the war “gives the enemy ammunition.”

“It kills the morale of our troops a little bit,” said Mrs. Adams as her young son wrapped his arms around her.

Now is not the time to back down from confrontation with those who would harm America, Mrs. Adams said. Doing so would strengthen terrorism.

“Here in Baltimore, if we didn’t stand up at Fort McHenry, we’d all be speaking with a British accent right now,” she insisted. “The reason we get the opportunity to protest is because our soldiers are willing to defend our country.”

Kay Sommers, a parishioner of the Holy Family Catholic Community in Middletown whose son, Kyle, is an Army Green Beret serving a second tour in Afghanistan after previously serving in Iraq, said she too gets upset by war protestors.

“My boy is putting everything on the line and he believes in it,” she said. “You have to support the boys. You can’t turn against them.”

Yet Mrs. Sommers said she wishes her son was home.

“With the Taliban building up their troops, this tour really scares me,” she said. “He’s been in several gunfights. Every time I hear his voice, it’s like a sigh of relief.”

Mrs. Sommers said her family sends care packages to her son filled with cookies, baby wipes and hot sauce he and his fellow solders use on grilled goat.

“We sent some beef jerky and that kept him going for two days during a firefight,” she said.

Mrs. Adams and Mrs. Woods said they are careful about letting their young children watch the television news. They don’t want to cause extra anxiety for them, they said.

“We try not to dwell on it every day,” said Mrs. Adams. “They know he’s over there trying to make it safe for children to play like they can play here in America.”

The most effective way citizens can support the men and women in the military services is to pray for them, Mrs. Adams added. Too often, they are forgotten, she said.

“Send them cards and care packages,” she said. “What they’re doing isn’t easy. They need love and support.”