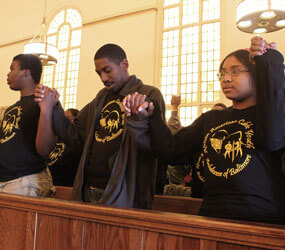 Timara Smith wasn’t sure what she was going to experience April 17 at New All Saints in Liberty Heights.

She was told there was going to be a gathering of Archdiocese of Baltimore African-American Catholic youths and little else. Nearly four hours later, she knew her place in place in the Catholic Church.

Smith saw the talents of her peers, who contributed in song, dance and passion, including at a closing Mass. She also saw the support of archdiocesan leaders and parishioners.

“It was really nice,” said the 16-year-old parishioner of Baltimore’s St. Francis Xavier said. “It’s rare to see black Catholics together and it felt good. We are all one – unified.”

The event resulted in a standing room only crowd for Mass at New All Saints, which holds about 350 people.

Prior to that, participants ate brunch and took part in meaningful vocation discussions. Photos and artwork of African-Americans who contributed to Catholicism in indelible ways were also displayed.

During the joyous Mass celebrated by Auxiliary Denis J. Madden, young people participated in the chorus and were sacristans, altar servers, lectors and prayer leaders.

“It feels good,” Richardson, 17, said. “Most of the time, you can see other non-African-American churches get together easily. Most black teenagers seem like they’re Baptist or don’t go to church. To see this many black Catholics, it’s a relieving feeling.”

Bishop Madden said it was “a pure blessing and a delight” to be among them. He then laid down a challenge.

“God placed us here so that we might join him in changing human history,” he said. “If you don’t believe that, you will be an observer of life. God doesn’t need any observers. He needs workers for the vineyard.”

Attendees also celebrated the 25th anniversary of the Harambee organization, which seeks to foster cultural awareness amongst African-American Catholic youths and inspire leadership.

Harambee means “all pull together” in Swahili. Howard Roberts, coordinator of the organization, was given the archdiocesan Medal of Honor by Bishop Madden. Roberts received a standing ovation and was also presented a stool from Ghana.

Roberts said he was surprised by the honors. He told those assembled, “This doesn’t stop here, brothers and sisters. We don’t want you to stop coming together in praising his name. Let’s do it again. Let’s do it again next week and the month after and the year after. Let’s do it for 25 more years.”

May 21, youth revival at St. Ambrose