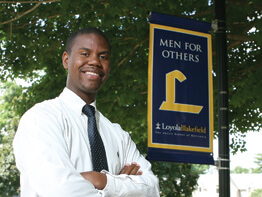 Living with eight different foster parents over the course of six years isn’t exactly a recipe for stability, but 18-year-old Morris Johnson didn’t let it hold him back.

With strong support from Catholic educators and a deep faith in God, the young convert to Catholicism made it through Mother Seton Academy in Fells Point and graduated this June from Loyola Blakefield in Towson. He plans to study business at Goucher College in Towson this fall.

A few days after receiving his high school diploma, Mr. Johnson said he is grateful for the opportunities he has received through his Catholic
upbringing. He’s not sure where he would be today had he not attended Catholic schools, he said.

“I really had to separate school from my home life,” said Mr. Johnson, whose Catholic education was made possible with the help of scholarships. “I had to let school become home to some degree. I had to believe and trust that God would help me.”

Mr. Johnson said the teachers at Mother Seton and Loyola became part of his family. He was particularly grateful to Father John “Jack” Dennis, S.J., former Loyola president, who invited him to Christmas Mass and dinner when he learned Mr. Johnson didn’t have anyone to celebrate the holiday with him.

“I spent Christmas Eve and Christmas with Father Jack and his family,” said Mr. Johnson, an eloquent young man who addressed his classmates at his baccalaureate Mass. “They became the support when I really needed it.”
The early years at Loyola weren’t easy. With the constant changes in his home life, Mr. Johnson’s grades suffered. But after he began living with Dr. Cynthia Neberdon-Morton in Woodstock, his foster mother of more than two years, he had a more stable home environment which enabled his academics to turn around. Mr. Johnson graduated with an A- average, he said.

“Loyola was the only thing I had to be involved in,” said Mr. Johnson, who was a member of the Blakefield chorus, concert band and a founding member of the culinary club. He also participated in the respect life club, the Christus team and the senior boosters.

It was while attending Mother Seton Academy that Mr. Johnson was attracted to the Catholic faith. He was then living with Warren and Linda Harris, parishioners of Our Lady of Hope in Dundalk, who nourished his interest in Catholicism. Mr. Harris was baptized at Our Lady of Hope when he was 12.

“When I was introduced to the Catholic faith it seemed very authentic to me,” said Mr. Johnson, who described receiving holy Communion for the first time as “exhilarating.”

“The church has lasted through two millenniums,” he said. “Everything else sprung from the Catholic Church. I wanted to be a part of it – other churches I had seen seemed too theatrical.”

Every night before he goes to sleep, Mr. Johnson said he prays the prayer of St. Michael, calling on the archangel to protect him from evil. He hopes to one day be able to help other youngsters who struggle with the same difficulties he faced.