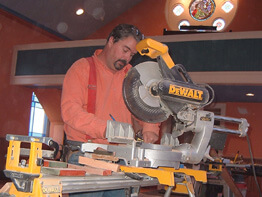 When fund-raising efforts to restore the old church at St. Athanasius, Curtis Bay began in 2005, life-long parishioner Helen Swinko imagined it would take years before she would see the place where she received her first Communion utilized.

However, just a little more than a year later the 73-year-old Glen Burnie resident witnessed the general contractors putting the finishing touches on the $450,000 project, which will transform the structure into a multi-purpose building. Although the restoration is not quite complete, a dedication ceremony for the 115-year-Old Church will be held at 2 p.m. Dec. 10.

“It’s just amazing that it all happened so fast,” Ms. Swinko said. “I was confirmed in the Old Church and it was sad to see it not being used and in such bad shape. I couldn’t be happier to see the work almost complete.”

That is a sentiment shared by the pastor, Father Robert A. DiMattei Jr., who has overseen several renovation projects in the new church building during his six-year tenure.

The swift response from parishioners stunned Father DiMattei, who said the quick turnaround is a testament to their faith and devotion to the parish.

Daily worship discontinued in the old church when the new St. Athanasius church building was built in 1955, but the building continued to be used for religious education classes and youth group meetings until the late 1980s, Father DiMattei said.

“We’ve pretty much just used it for storage for the last several years,” he said. “It was in terrible disrepair.”

As the parish completed other capital improvement projects on the main church, parishioner Greg McGuigan of Pasadena believed the old church project would take a backseat for many more years.

When the capital campaign for the old church began in October of 2005, parishioners Andy and Joyce Walter of Arnold donated $50,000, encouraging others to open their hearts and wallets for the project, said Mary Beth Barnes, pastoral associate and director of religious education for St. Athanasius.

When the parish held a walk-through of the old church that same month, they raised an additional $67,000 in one day and parishioner Millard Herold of Federal Hill kicked in another $25,000, Ms. Barnes said.

By January, the parish raised $300,000 and to date has received $446,880 in pledges, all in a community of modest to lower-income residents, she said.

The Belada Family of Curtis Bay donated a digital organ for the main church building, allowing the parish to move the old organ to the old church, which should be operational by the Dec. 10 dedication ceremony, Father DiMattei said.

As a multi-purpose building, the old Church will be used for parish meetings, educational workshops and paraliturgial services, Ms. Barnes said. Paraliturgical is a term describing communal prayer services that are not part of the official worship, or liturgy, of a church.

Parishioner Joe O’Malley of Brooklyn Park said he would like to see weekday Masses conducted in the old church, an idea Father DiMattei insists is under serious consideration once all of the work is complete.

“I always liked the smaller church,” said Sylvia Swinko, 71. “It’s got a more intimate feel to it. I can’t believe we’re going to see it opened again. I really can’t believe it happened so fast. It just shows you what people can do if they want it badly enough.”