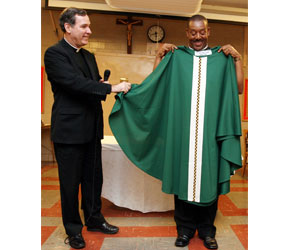 Mother Nature may have moved the scheduled “Mass in the Grass” event at the Cathedral of Mary Our Queen indoors, but it did not lessen the excitement of worshipping with a special guest of honor.

The May 22 Mass in the Grass service and picnic ended up being held inside the Cathedral School’s cafeteria due to the threat of rain. However, once it became apparent that the day would remain dry, those in attendance – primarily children – were able to go outside and enjoy live music courtesy of St. Veronica’s Steel Drum Band.

“We hope we can bring help there, but we also know they’ll bring help to us,” said Monsignor J. Bruce Jarboe, rector of the cathedral. “We don’t see this as a project for us, but as a pastoral relationship that will go on.”

This past February, Deacon Rodrigue Mortel, a native of Haiti, guided Monsignor Jarboe and other leaders of the cathedral parish to Gonaives

Local parishes are not strangers to helping out parishes in Haiti, the poorest nation in the Western Hemisphere. According to Monsignor Jarboe, there are 22 parishes in the Baltimore archdiocese that have relationships with churches in the city of Gonaives. This can be credited to Baltimore’s Operation Haiti, which was founded by Deacon Mortel.

“There had already been a relationship that existed between the archdiocese of Baltimore and Haiti, but there had never been one between the actual cathedrals,” Monsignor Jarboe said.

Another factor that led to the relationship was the magnitude-7 earthquake that devastated Haiti in January of 2010. Parishioners at the cathedral here were eager to help the victims of the natural disaster. In assisting with immediate needs – the cathedral’s service outreach committee for Haiti partnered with Catholic Relief Services to send more than 20,000 meal packages overseas – the parish also was attentive to the area’s long-term needs as well, essentially laying the groundwork for the relationship.

Father Mesidor, who primarily communicated through translator Ginger Galvez, spoke at the weekend Masses and said he felt very appreciated and welcomed by the parishioners.

Monsignor Jarboe said the parishioners were taken by Father Mesidor’s words and his message of the assistance needed in Haiti. Having Father Mesidor there in the flesh personally connected the relationship he said.

Monsignor Jarboe said both parishes are still in the familiarization process with one another, and each plans to travel to see the other once a year.

Monsignor Bruce Jarboe presented Father Roi Roi of St. Charles Borromeo Parish in Gonaives, Haiti with vestments for the missions where he celebrates mass in Haiti during mass and a picnic at Mary Our Queen School in Baltimore Sunday.