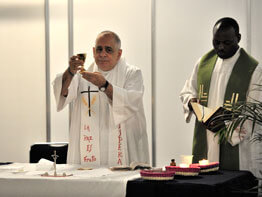 MEXICO CITY – Early in the 1990s, AIDS appeared to be ravaging Haiti in the same way the virus was devastating sub-Saharan Africa; almost 10 percent of the adults of the impoverished Caribbean island were HIV-positive, and the number was increasing every year.

However, this year the number decreased to 3.8 percent. The reason for the success, said Dr. Dianne Jean-Francois, director of the Haitian office of the New York-based Catholic Medical Mission Board, is that church groups, secular charities and governments have all worked together to combat the effects of the virus.

“No group can fight this threat alone. We can’t let differences of ideas on condoms or anything else stop us working together,” Jean-Francois told Catholic News Service at the XVII International AIDS Conference being held in Mexico City Aug. 3-8.

“Catholic aid is extremely important in Haiti because we have a huge network across the country. But other groups, including the U.S. government, bring in the necessary medicines. Together we can get people the treatment they need,” she said.

Looking for a unified fight against the effects of HIV is the goal of many Catholic and other faith-based groups attending this conference, which has approximately 22,000 delegates from around the world. AIDS workers from Mexico to Zambia say cooperation with broad shared goals is the only effective way to battle infection rates.

“Our aim is to get people the help they need. If we combine forces with the government and other groups, that makes our effort all the stronger,” said Doris Odera, director of the Catholic Medical Mission Board’s Kenyan offices.

A main focus for cooperation is the use of antiretroviral drugs, a tactic that has now been endorsed by most governments as well as faith-based groups. The medicines have been credited with helping sharply reduce infections in Haiti and other countries for two reasons: They allow mothers to stop passing the virus to their children, and a person using the drugs has a dramatically reduced chance of passing the virus to a sexual partner.

“There were originally doubts about whether it was realistic to get expensive antiretroviral drugs out to people in poor countries,” said U.S. Monsignor Robert J. Vitillo, the Geneva-based special adviser for HIV and AIDS for Caritas Internationalis. “But now working in cooperation we have shown it can be done and we have reached the 3 million mark – of people receiving them.”

While antiretroviral drugs are now free in Haiti and several other countries, they are still relatively expensive in Mexico. In a show of action at the conference, Mexican President Felipe Calderon announced his government is immediately lifting restrictive regulations on generic antiretroviral drugs.

The Rev. Jape Heath of the African Network of Religious Leaders Living With or Personally Affected by HIV & AIDS also called for solidarity in the global anti-AIDS effort.

“Many in the community of infected people are angry with religious groups because of their intolerance to prevention methods,” said Rev. Heath, an Anglican priest in the Diocese of Johannesburg, South Africa. “I’m here to try and bridge that gap. HIV sufferers have a lot to teach religious groups because they know their needs. Meanwhile, faith-based groups are still some of the biggest sources of health care in the world.”

Rev. Heath, who is HIV-positive, said antiretrovirals are one of the most powerful weapons in the fight, and he praised the South African government for finally fully embracing them.