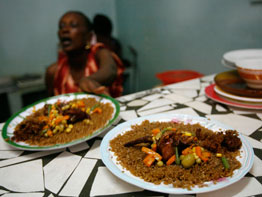 LIMA, Peru – As protests over rising food costs spread around the globe, experts warn that high prices are here to stay, and Catholic bishops are calling for governments to take emergency measures to keep their poorest citizens from going hungry.

Already this year, demonstrations linked to spiraling food prices have struck more than a dozen countries in Asia, Africa and Latin America. Protests forced Haitian Prime Minister Jacques-Edouard Alexis out of office April 12, and demonstrators have been killed in Cameroon, Peru and Mozambique.

The price increases are fueled by a variety of factors that “are all coming together at once,” said Lisa Kuennen, director of the public resource group at Catholic Relief Services, the U.S. bishops’ international relief and development agency.

Another factor is the rising standard of living in China and India, which has led to increased demand for luxury foods such as meat and milk. Because it takes seven or eight pounds of grain to produce a pound of meat, increased meat consumption drives up demand for grain and, therefore, the price.

In Guatemala, the price of tortillas, a staple food, has risen 30 percent in the past few months. Poor Mexicans, who eat nearly a pound of tortillas a day per person, have seen the price double in the past two years. Workers earning the minimum wage of about $4 a day now spend as much as one-third of their earnings on tortillas for the family.

“There has been an uncontrollable rise in the price of tortillas and other basic elements,” Mexican Bishop Felipe Arizmendi Esquivel of San Cristobal de Las Casas said last year. “Society and the church have to support social development programs so that the poor can be self-sufficient and not have to depend eternally on government and private help.”

In Burkina Faso, prices of staple foods rose between 14 percent and 67 percent, she said, and families now spend as much as 75 percent of their income on food. Unlike past years, this year these price increases are appearing at harvest time, when products are most abundant and prices should be low, Ms. Kuennen said.

High prices can be good news for farmers who have a crop surplus to sell, but for those who must purchase food to supplement a subsistence harvest – and for people in urban areas who do not grow their own food – higher food prices mean there is less money to spend on other essentials, such as health care or children’s education.

The scope of the food crisis puts an extra strain on aid organizations, Ms. Kuennen said. In the past, food shortages were more local and foreseeable, making it easier for humanitarian groups to respond. The current crisis is striking all around the world, however, and high oil prices make it more expensive to ship food to those who need it most.

The U.N. World Food Program had budgeted $2.9 billion to aid some 70 million people this year. In March, however, officials estimated that they needed another $500 million to meet that target, and by April that figure had grown to $755 million, partly because of increased shipping costs.

Great Britain has pledged an additional $900 million in assistance to the World Food Program, and the U.S. government has decided to release $200 million of its emergency food aid reserve. Aid workers say it is important to allocate money to rebuild the reserve as soon as possible.

Ms. Kuennen said that U.S. food aid dropped to its lowest level ever last year and is expected to be below the legally mandated minimum of 2.5 million tons this year. Between 2001 and 2006, the U.S. government donated an average of 4.4 million tons of food a year to needy countries, she said.

Food assistance is only a stopgap measure, Ms. Kuennen said, but such aid, along with programs to provide cash or vouchers to poor families, is a crucial response to the immediate crisis.

“People need to be kept from starving and from rioting,” she said.

After violent protests in Haiti in early April, the country’s Catholic bishops urged the government to implement both emergency and long-term policies to tackle hunger. In a statement issued April 12, the Haitian bishops’ conference condemned the violence that began with protests in the southern city of Les Cayes and left at least five people dead.

Although “the right to demonstrate is sacred,” the statement said, “this does not authorize anyone to take lives or attack property belonging to others.”

In their statement, the bishops warned that peaceful demonstrations should not be infiltrated by “agitators and interested manipulators.” Many Haitian analysts had suggested that the demonstrations over high food prices had been hijacked by politicians trying to turn the unrest to their political advantage.

If oil prices remain high and the demand for staple foods continues to grow, countries will need long-term policies to deal with the effects of food-price increases and quell discontent.

Some countries have begun providing food subsidies, have lowered import tariffs on food or have halted exports of grains and vegetable oils. John Hoddinott, a senior research fellow at the International Food Policy Research Institute in Washington, said those measures are misguided. Subsidies are costly and difficult to eliminate, he said, while lower tariffs push prices down and discourage farmers from planting more crops, because they cannot be sure of earning enough to cover their costs.

Many countries have limited exports of certain staples. China has blocked rice and maize exports, while India has stopped exporting milk powder and Bolivia has banned the export of vegetable oil to its South American neighbors. Those bans exacerbate shortages, Mr. Hoddinott said, driving prices up further.

Long-term policies must include increased investment in agriculture and development and more consistent international trade policies, he said.

Ms. Kuennen said developing countries also must connect small farmers with markets, help people diversify their sources of income so they are not as vulnerable to volatile food prices, and implement land reform.

Land reform is a pressing issue in Kenya, where only 20 percent of the land is suitable for growing crops. Conflict over access to land was a factor in the violent protests that followed the recent Kenyan presidential elections, said Archbishop Peter Kairu, who heads the Kenyan bishops’ justice and peace commission. An estimated 1,000 people were reported killed and more than 300,000 people were displaced in the unrest in Kenya, where absentee landlords own huge expanses of land.

Ultimately, experts say that effective long-term policies are crucial to keeping large numbers of people from slipping back into hunger and poverty.

“We really need to help poor people become better off,” Hoddinott said. “That is the long-term solution.”

Contributing to this story were Ioan Grillo in Mexico, Francis Njuguna in Kenya and Mary Durran in Canada.