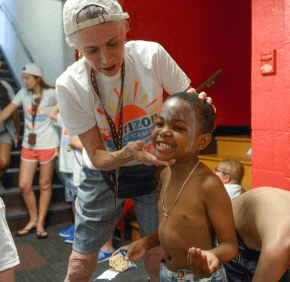 Second in a series, “How I Spent My Summer Vacation” By Erik Zygmont
ezygmont@CatholicReview.org

LUTHERVILLE – “I really like kids in the first place,” said Hannah Flayhart, explaining her decision to volunteer at Horizon Day Camp, which serves children affected by cancer. “It’s really great to see them having a good time and not worrying about doctors or medical issues.”
Flayhart, a rising junior at Maryvale Preparatory School, leads the children in activities on the same halls and fields she trods as a student.
According to Heather Warnack, director of communications and development for the all-girls, grades 6-12 school, it is natural for Maryvale to host Horizon.
“We decided we needed to make room for this camp, because our missions align,” she said.

When it was announced that Maryvale would host the camp, students poured into the Erinn McCarthy Humanities Hall – named for a student who died of cancer in 2007 – to see how they could help.
“I just wanted to give the kids a summer where cancer doesn’t really define them, and they can just be kids,” said Mya Buschman, a rising senior.
Buschman’s take matches that of the camp itself, which is free, open to children 3? to 16 who are dealing with cancer – from diagnosis to five years post-remission – and their siblings.
“We don’t talk to the kids (about cancer) at all,” said Amy Bram, camp director. “We’re providing what we call a regular camp experience.”
That includes athletics, arts and crafts, swimming, a ropes course and more.
Horizon utilizes 30 staff with a rotation of eight nurses. A medical director is periodically on site and always on call.
Mark McElrath, vice president for development, noted that activities are modified according to the kids’ medical restrictions, with the goal of some degree of integration.
“The misting tent is right beside the pool,” he said, “so kids not up to swimming can still participate.”
Horizon Day Camp, which began July 7 and concludes Aug. 18, is the first Baltimore venture of the Sunrise Association, which also operates camps in New York and Israel.

The 36 children attending come from metropolitan Baltimore and Washington, D.C., McElrath said. The camp is affiliated with The Johns Hopkins Hospital, Sinai Hospital and the University of Maryland Medical Center Children’s Hospital, all in Baltimore, as well as the Children’s National Medical Center in Washington.
The Sunrise Association started as an initiative of the Jewish community, and its partnership with Maryvale is not its first with a Catholic institution.
Bram said she looks forward to sharing the summer camp experience with as many kids as possible.
“The magic of camp is something every single human being should experience in their life,” she said, defining the “magic of camp” as “what it means to uncover yourself, be yourself, and be part of a supportive community.”