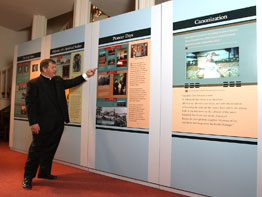 New York socialite, mother of five children, 29-year-old widow, ostracized Catholic convert, teacher and founder of a school and an order of nuns.

St. Elizabeth Ann Seton’s many roles along her spiritual journey come to life in a traveling exhibit at St. Mary’s Spiritual Center & Historic Site in Baltimore.

The exhibit relies on paintings, photos and videos to tell the story of the first American-born saint.

“I invoke her as daughter, wife, mother, teacher, convert, widow,” said the exhibit’s designer, Sister Irene Fugazy of the Sisters of Charity. “She was a very special woman in that she lived each role that a woman could and lived it to its fullest.”

One of the exhibit’s six panels includes a video of St. Elizabeth Ann’s canonization on Sept. 14, 1975. Before a huge crowd at the Vatican, Pope Paul VI is shown saying, “St. Elizabeth Ann Seton is an American. All of us say this with special joy with the intention of honoring the land and the nation from which she sprang forth … . Be proud of her. And know how to preserve her heritage.”

Marking the 200th anniversary of St. Elizabeth Ann’s 1808 arrival in Baltimore, the exhibit describes her loss of her father when she was a child, then her husband, William, and two of her five children, who died in their teens.

Elizabeth Ann’s husband, a founding partner of a mercantile firm, contracted tuberculosis and went to stay with a friend, Antonio Felicchi, in Leghorn, Italy, in hopes of restoring his health. After William’s death, the Felicchi family took in St. Elizabeth Ann and daughter Anna Maria. Mr. Felicchi’s devout Catholicism influenced St. Elizabeth Ann, and the exhibit shows a painting of the Assumption of the Blessed Virgin Mary in the Felicchi family’s private chapel.

The exhibit chronicles St. Elizabeth Ann’s return to New York and her 1805 conversion to Catholicism, and a display shows her crucifix and prayer book.

As a young mother in 1808, she accepted an offer from Archbishop John Carroll to come to Baltimore to found a school for girls at what is now the Spiritual Center & Historic Site. She also took her first vows as a sister and started a new order, the Sisters of Charity of St. Joseph.

St. Elizabeth Ann moved her school and the Sisters of Charity to Emmitsburg in 1809.

Her school became a model for U.S. parochial schools, the exhibit points out, and several religious orders that trace their roots to St. Elizabeth Ann continue to thrive, running schools, colleges, nursing homes, orphanages, centers for AIDS patients, programs for addicts and shelters for abused women and children.

“When we see the challenges we face in our attempt to grow spiritually,” he said, “they can’t be any more challenging that what Mother Seton faced.”