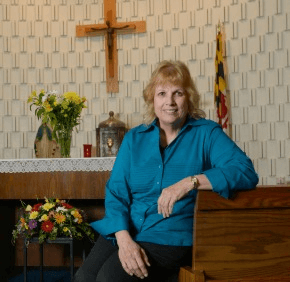 By Paul McMullen
pmcmullen@CatholicReview.org
Twitter: @ReviewMcMullen
CUMBERLAND –Susan Trice took her first holy Communion in 1958, at Our Lady of Hope in Dundalk.

She took what she describes as her “second first holy Communion” Nov. 13, 2013, at Bishop Walsh School.

That interlude is interesting enough that Trice will be featured on “Catholics Come Home,” an EWTN series focused on those who found the faith or returned to it. The episode will premier Nov. 13, three years to the day after she formally completed a long, circuitous journey back to the Catholic Church.

Trice was baptized at St. Dominic in Hamilton and confirmed at St. Stephen in Bradshaw. She has been an art teacher at Bishop Walsh School, the only Catholic school in the Archdiocese of Baltimore west of Hagerstown, since 2001.

It was during her training for that field, at the University of Maryland in College Park, that she found herself drifting away from the faith. She had entered college at the end of the long, hot summer of 1968, when campuses across the nation were reeling from the assassinations of Rev. Dr. Martin Luther King Jr. and Robert Kennedy, and protests against the Vietnam War.

“I fell into the world, I fell away,” she said of her time in College Park and the years that followed.

From 1982 to 2006 she was married to Max Greenfield, a United Methodist minister who led congregations in Baltimore’s Hampden neighborhood and then Cumberland. While she worshiped in United Methodist and other Protestant churches, she held on to the physical reminders of a cradle Catholic.

Twelve times in her life, Trice has changed address. Twelve times, she made sure to pack her mother’s cross and mementos of her first Communion, a pink rosary and a child’s prayer book, “My Little Heart Prays.”

“I missed God. I wanted to come back, but I didn’t know how,” said Trice, who remembers sitting in a painting class in 1999, and thinking, “Wouldn’t it be cool to paint my first Communion?”

A friend from her art circles pointed Trice to a job opening at Bishop Walsh, but even after she was hired by School Sister of Notre Dame Phyllis McNally, then the school’s president, she rebuffed an invitation to return to the church.

“She said, ‘You ought to come back.’ I told her, that’s never going to happen,” Trice said.

She continued, however, to feel pulled in that direction. During Equip for Ministry training for Bishop Walsh teachers, she found herself nodding in agreement with church doctrine and practice.

Finally, it was an encounter with a serpent in August 2012 that cemented her commitment.

Working in her pottery studio on Haystack Mountain near La Vale, Trice spied a “large snake” moving toward her potter’s wheel.

“I was on the phone,” Trice said, “getting ready to fire up the kiln, and told my friend, ‘Pray for me.’ Then I made the sign of the cross and prayed. I used to do that, to settle myself down. It’s one of the reasons I always felt connected to the Catholic Church. … The sign of the cross has power that I didn’t know.”

Immersing herself in her re-formation, Trice returned to full communion during a Mass at Bishop Walsh School that was celebrated by Capuchin Franciscan Father Stephen Fernandes, now the pastor of St. Joseph Parish in York, Pa.

Her commitment to the church was just beginning.

During the 2014-15 school year, Trice took to leaving Bishop Walsh for noon Mass at the Shrine of Ss. Peter and Paul in Cumberland, as she said, “I can eat anytime.” She is among the organizers of the women’s holy hour there on the first Sunday of the month, and frequents other churches that comprise Our Lady of the Mountains Parish.

That holy hour was instituted last December, as part of the holy year of mercy. It concludes Nov. 20, which, Trice notes, coincides with her birthday. The shrine in Cumberland was one of eight holy door sites in the archdiocese; how many other worshippers wrote a thank-you to Archbishop William E. Lori for that designation?

“It might be the last time for me to walk through a holy door,” Trice said.

She prays the rosary daily, and on Oct. 24, began preparation to become an extraordinary minister of holy Communion.

The more packed her schedule becomes, the lighter she feels.