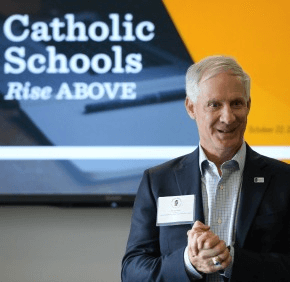 By George P. Matysek Jr.
gmatysek@CatholicReview.org
Twitter: @ReviewMatysek
Amid news that Catholic school enrollment in the Archdiocese of Baltimore has stabilized for the first time in a decade, Archbishop William E. Lori challenged school board members throughout the archdiocese to redouble their efforts at keeping Catholic education strong.
Speaking at the second-annual Leadership Summit for school board members, held Oct. 22 at Loyola University Maryland in Baltimore, Archbishop Lori said it is the responsibility of school boards to ensure that school operations reflect and foster the mission of Catholic education. Evangelization and catechesis should be at the “heart” of that mission, he said.
“You are the keepers of the flame,” Archbishop Lori told an audience of 130. “If the flame is burning brightly, chances are the school will succeed. If it should flicker, the future of the school is endangered.”
James B. Sellinger, chancellor of education for the archdiocese, announced that for the current school year, enrollment in 49 archdiocesan schools stands at approximately 17,000 – down just 39 students from the previous school year.
Enrollment at city schools was bolstered with the help of a new $5 million state program that provides tuition assistance to children from low-income families. Cardinal Shehan School in Baltimore, for example, has seen a 27 percent increase in enrollment from the previous school year.
Archbishop Lori noted that the results of a recent marketing study also show that demand for Catholic education is high. The archdiocese annually receives more than $30 million for requests for tuition assistance, Archbishop Lori said, with this year’s requests approaching $40 million.

Sellinger called recent enrollment trends “wonderful” and “very encouraging news.” He asked school leaders to be open to new ideas and ways of thinking, warning against the temptation to “do things as they’ve always been done.”
“This is a team effort,” he said. “It’s not the archdiocese versus the schools. We are all pulling on the oars together. We are going to be here to help you all along the way. Our success is only going to be achieved by working together.”
‘Heart of our mission’
The mission of Catholic education should reflect Christ’s mandate to his followers to teach all nations, Archbishop Lori said.
“We are seeking to form disciples, competent disciples, and to give them the benefit of an excellent academic formation, a safe environment where they can grow in virtue, where they can learn how to love God and neighbor, and seek to lead not self-centered life, but a life of service to others,” the archbishop said.

In looking at the health of a school, school boards should develop “dashboards of critical indicators” that provide snapshots of a school’s financial statements, budget, liabilities, enrollment trends and more, the archbishop said. Similarly, he said, boards must recruit members with marketing and fundraising expertise.
The archbishop announced he intends to begin annual visits in the new year to school board meetings by staff from the Catholic schools’ office to “review the audit, the dashboard of critical indicators and to set metrics.”
“I think such annual visits will be good occasions for dialogue, communications and the development of a sound understanding of where a school is and where it might be going in the future,” he said.
Improving efficiencies
Sellinger, speaking at the beginning of the summit and at later breakout sessions, encouraged school boards to look at ways of improving efficiencies at their schools so that savings can be reinvested in education. Principals might consider adopting standardized technologies such as the free Google App for Education and moving to cloud-based technology that stores and accesses data and programs over the Internet instead of having to manage expensive infrastructures, he said.
Other savings could be realized through taking advantage of an online system for managing library inventories, a program for managing donor databases, a common janitorial service and other services that have been vetted by the archdiocese.
Highlighting the importance of maintaining websites that are attractive, up-to-date and that offer convenient features such as online school registration, Sellinger pointed out that a parent searching for a school for his or her child visits a prospective school’s website an average of 19 times before ever setting foot on campus.

Mary Beth Lennon and John Coppola listen to a presentation at the Oct. 22 Leadership Summit. (Kevin J. Parks/CR Staff)
Catholic schools could improve their websites by availing themselves of new standardized school websites offered through the archdiocese that feature common navigation across the school system while maintaining an individual school’s identity, Sellinger said. Fifteen schools have already switched to the new design, which was developed by the Piccirilli Dorsey marketing agency in Bel Air.
The archdiocese has stepped up its schools advertising in the past year, Sellinger said, developing a “Rise Above” theme for Catholic schools and running a commercial for nine months on WBAL-TV promoting Catholic education. A commercial focused on early-childhood education is currently being produced and is expected to launch in late November, he said.
In other areas, Matt Regan, project manager in the archdiocesan division of facilities and real estate, said it is critical for schools to hire qualified people to maintain their properties. Schools boards need to be aware of ever-changing federal, state and local regulations, he said. He encouraged school boards to identify and develop relationships with regulatory bodies such as the health department, the Maryland Department of Education, fire departments and zoning commissions.
Joyce Becker, a member of the school board at Archbishop Curley High School in Baltimore, said she left the leadership summit impressed by the many resources that are being made available to schools by the archdiocese.
“There really is a concerted effort to work more collaboratively,” said Becker, dean of the School of Graduate and Professional Studies at Stevenson University.
School boards are critical to the viability of Catholic education, she said, because they provide a way of looking at the “big-picture.”
“Your president and principal and faculty are ingrained in the day-to-day operation of the school,” she said. “It’s good for a group to have that global perspective and bring an external expertise.”

The Leadership Summit was organized with the help of Camille Brown, associate superintendent for school leadership and community programs. Anthony Sabatino, professor of school leadership at Loyola Marymount University in California gave the keynote address on national standards, recruiting and Catholic identity.

Editor’s Note: George Matysek is a member of the Our Lady of Mount Carmel School board in Essex.