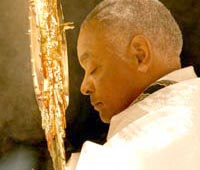 A record of about 30,000 people – 10,000 more than last year – came to the convention center near Atlanta’s airport June 8 and 9 for the archdiocese’s 12th annual eucharistic congress.

The theme of the 2007 congress, “The Food That Endures for Eternal Life,” drew from the passage in St. John’s Gospel in which Jesus, shortly after feeding a large crowd with a few fish and loaves of bread, says: “You are looking for me not because you saw signs but because you ate the loaves and were filled. Do not work for food that perishes but for the food that endures for eternal life, which the Son of Man will give you.”

At an opening healing Mass the evening of June 8, Archbishop Gregory urged the 2,000 participants, “Pray not only for your own needs. … Pray for one another, pray for this local church, that we may grow strong in our faith and our commitment to Christ, strong in our love for one another.”

“Welcome, and may this eucharistic congress sanctify this local church,” he said. He said that for the two days of the congress the convention center was “the cathedral of Atlanta.”

Father Fernando Suarez, a member of the Canadian religious community of the Companions of the Cross, celebrated the Mass, followed by a healing service at which more than 1,000 people waited prayerfully and patiently until they received an individual blessing and prayer from him as he walked from person to person, touching their foreheads and praying briefly.

For the eucharistic procession and exposition the following morning, dozens of parish banners, handcrafted of multicolored fabric, with diverse languages and devotional images embellished on them, decorated the assembly area.
Archbishop Gregory paid tribute to retired Atlanta Archbishop John F. Donoghue as “the grandfather of this eucharistic congress.”

“Through his own good example and deep faith, he began this custom which we continue today,” Archbishop Gregory said.

The events of the congress included several special workshop tracks, including one for Hispanics, who now make up a sizable portion of the Catholic community in the Atlanta Archdiocese.

At a press conference just after the exposition service, Father Jose Duvan Gonzalez, head of the archdiocesan Hispanic ministry office, called the congress “an event that is long-awaited by our community. In a place like this we realize our church is multicultural … one church under one holy God.”

At the start of the general track, Tony Melendez, renowned for his music and his fervor for God, led those gathered in enthusiastic song and praise.

Born without arms in Nicaragua after his mother took thalidomide during her pregnancy, he persevered and became an accomplished musician, playing the guitar with his feet for audiences worldwide.

“How about putting those feet together?” he shouted, as people laughed and stood to clap and sing. Sharing his story, he assured those listening that “you really do have the strength to give as much as you can in the world.”

Christians do not build up Christ within themselves, he said, but they cooperate with the Holy Spirit who is the one accomplishing this transformation.

In a closing talk Archbishop Gregory said, “As a eucharistic people who follow the example of Christ himself, we place ourselves in complete dependence upon God’s bounty. When we gather about the Lord’s table, we all stand in absolute and humble indebtedness to the Father who is the source of every gift.

“The eucharistic table recognizes no superior or inferior participants – no one ever takes his or her place around the altar who is truly worthy of God’s generosity. We are all the beneficiaries of God’s goodness,” he said.

Archbishop Pietro Sambi, papal nuncio to the United States, preached the homily at the closing Mass. He tied the congress to the first two major documents of Pope Benedict’s pontificate, “Sacramentum Caritatis” and his encyclical, “Deus Caritas Est” (“God Is Love”).

“God, who is love, reveals himself so fully in the incarnate word – Jesus the Christ,” the nuncio said.

“This revelation of love, which forever changed humanity and the world, continues to express itself in an ongoing, dynamic movement in the sacrament of love – the Eucharist,” he said.

“Giving himself to us in the Blessed Sacrament, the Lord Jesus invites us to share a profound and intimate union with him. In this great sacrament, Our Lord is no less present among us than when he walked the earth,” he said.