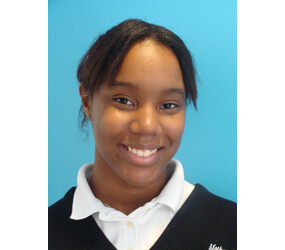 Alayna Albertie looked around the 2009 OppenheimerFunds/NFTE National Youth Entrepreneurship Challenge in New York Oct. 7 and noticed something very quickly. She was the youngest competitor by five years.

Although the Mother Seton Academy eighth-grade student did not advance past the first day of competition, she had no fear because she believed in her vision.

It’s a vision created out of blindness.

Her 6-year-old cocker poodle, Pepper, has an eye infection and is half-blind. Last year, as she took a Mother Seton class sponsored by the National Foundation for Teaching Entrepreneurship, she came up with the idea for “Alayna’s Barking Biscuits.”

Pepper was abused when she was younger and was then adopted by Alayna and her family. Alayna wanted to find something that made the dog feel better.

“I want to make a difference in dogs by making a healthy dog treat,” said the parishioner of St. Matthew, Northwood. “She loved it. When she likes it, she does a little dance, barks and jumps. I knew she really liked it when she did the little dance.”

The biscuits are made from flour, wheat germ and corn meal, but Alayna said the total recipe is a secret. Alayna started sharing the biscuits with other people and they became in demand around Baltimore. She started selling 25 of them in a bag for $6.75 at fairs and other large gatherings.

Alayna took the optional entrepreneurship class at Baltimore City’s Mother Seton because she wanted to learn how to run a business. Initially, Alayna desired to develop a clothing line, but discovered “that wasn’t realistic enough.”

Her parents gave her $200 to start the biscuit effort and she estimates that it has made more than $900 since.

Alayna was selected to participate in the national contest after winning local and state NFTE competitions.

Sister Joan Warner, a member of the Daughters of Charity, teaches Alayna at Mother Seton Academy.

“As her teacher, I couldn’t be more proud of Alayna and her accomplishments,” Sister Joan said. “The NFTE program has provided Alayna with skills and knowledge that she can use now and in the future. Alayna is always looking to see how she can improve her business plan and presentation. She takes what she learns in each instance and grows from the experience, with the ability to apply her lessons in the future.”

Alayna is still considering where she will attend high school. A school in New Hampshire has offered her a scholarship. She wants to open a store in Baltimore and more along the East Coast.

Mother Seton recently moved to a new building, which Alayna said was, “so fresh and grand.”

Alayna returned to Mother Seton Academy after the competition encouraged by her schoolmates. They gave her a standing ovation.