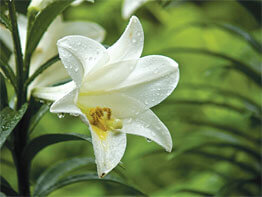 There are few symbols of the Resurrection more powerful to Father Samuel Young than the empty tomb. The image helps crystallize what Christianity is all about, he said – that Christ conquered death and gave new life to the world.

When he gives his Easter homily this year, the pastor of St. Joan of Arc plans to talk about the meaning of the empty tomb and how it applies to everyday life. It will be the kind of message many priests throughout the archdiocese plan to share with the many thousands of parishioners who will fill the pews on Easter.

“The living Christ in the Eucharist is a result of the Resurrection,” said Father Young.”

The empty tomb was discovered by Mary Magdalene and other women in the Gospel who recognized Christ’s resurrection. They ran to the apostles to share the good news.

To drive home the theme of the empty tomb, St. Joan has erected a three-foot tomb in the church. It has been sealed all through Lent and will be opened for the Easter Vigil, Father Young said. It’s an added visual way of helping people remember the significance of Christ’s death and resurrection, he said.

“We wanted to use that imagery so that it will last in their minds,” the priest said.

Father Young said there is also a spiritual resurrection that comes through reconciliation.

“We die to our sins and rise to a better life,” he said.

In his Easter homily, Father C. Doug Kenney, pastor of St. Ann in Hagerstown, said he plans to talk about encountering the living Christ in other people.

“It’s not just looking for him in the tabernacle or in adoration,” he said. “When we see someone, we don’t think that looks like Christ, but we need to start thinking like that.”

With more people in the pews on Easter, the pastor said it’s an opportunity to reach out and make people feel welcome.

That’s a theme that will also be sounded at St. Joseph in Sykesville, where Father Terry Weik, M.M., pastor, said he will encourage worshippers to embrace the Resurrection.

“The Lenten and Easter seasons remind us that ours is a God who brings goodness from evil and grace from sin,” said Father Weik.

The Easter message is more important than ever, he said.

“We live in a culture of instant gratification,” Father Weik explained. “Easter challenges us to be devoted to our values in a very real way that leads to the path of life.”