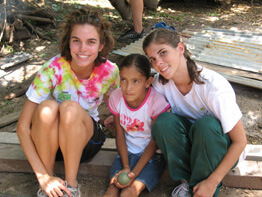 The change in fortune for one family in the small village of Agua Caliente, El Salvador, is as concrete as the freshly poured cement floor and new roof of their home. For the Baltimore teens who worked on the decaying house, the personal transformations, though perhaps less tangible, were just as profound.
Six Baltimore teens, ages 16-18, took part in a summer service trip July 21-28 to a rural town in El Salvador, where they worked alongside Salvadorian teens in restoring the home to a more livable condition. Organized by Deacon Rodrigue Mortel, M.D., director of the Office of the Propagation of the Faith and the Baltimore-Haiti Solidarity Project, the trip was designed to immerse participants in the culture of a developing country.
“We were impressed that every single one reported that this trip changed their perspective on life,” said Deacon Mortel. He explained that one goal of the Office of the Propagation of the Faith is to provide both adults and teens experiences in the developing world that will influence their lives long after they return home. He cites Baltimore’s growing Hispanic population as one reason El Salvador was chosen.
“I identified a family that was destitute – no income, no resources – living from the gifts of friends. You could see sun through the roof; there was a dirt floor and no electricity or running water,” said Deacon Mortel.
“It was very educational to see the circumstances that some people live in,” said Kasey Quinn, 18, a parishioner of Our Lady of Perpetual Help in Ellicott City and a participant in the trip. “You can see a picture of poverty in a magazine, but it’s different when you see it first hand.”
By the end of the trip, the group, which also included Maddie Burke, Lucas Horn, Mary Bolgiano, Becky Floccare and Lauren Malischak, along with the town’s youth group and other volunteers had replaced the roof and laid a new floor, using donated materials.
Lucas, an18-year-old parishioner of St. Ursula in Parkville, was surprised by not only some of the differences in the two cultures but also by the similarities between the two sets of teens. “A lot of their problems were the same as ours. They worried about going to school, their grades, their boyfriends or girlfriends. But it was a little different for them because they worried more about money.”
Unlike the Americans, anxiety about paying for their high school educations weighed heavily on the Salvadoran teens, who do not have the option of free public school, said Lucas.
The two groups forged close ties, and Kasey recalls the farewell party thrown by Agua Caliente’s youth group as the highlight of the trip. “There was just such a sense of camaraderie. You really cherished these people you had met.”
Maddie agreed, “One of the best parts of the trip is learning about the culture of the people in Agua Caliente. The culture is so friendly and welcoming all the time.”
On the last day of the trip, the group went to San Salvador, where they visited an orphanage and the home and tomb of Archbishop Óscar Romero, , who was murdered in San Salvador, El Salvador, while celebrating Mass in 1980.