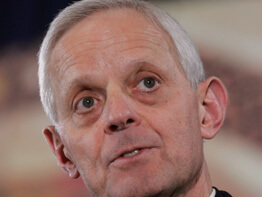 WASHINGTON – Because of growing deficits and declining enrollments faced by its center-city Catholic schools, the Archdiocese of Washington announced a proposal Sept. 7 to reconfigure a consortium made up of the 12 schools.
According to the proposal, four of the 12 Catholic schools currently in the Center City Consortium would make up a new consortium and the other eight schools would form a values-based charter school group by the next school year.
Charter schools are publicly funded but privately run. Under the proposed plan, the parishes would lease their buildings to the charter operator.
The proposal was announced following a consultation that began this spring. The plan is expected to undergo further consultation with diocesan officials, pastors, parents, school staffs and school and parish advisory councils of the affected schools.
Washington Archbishop Donald W. Wuerl is expected to make a decision on the proposal by late October after the consultation is completed.
The archdiocese and donors have invested more than $60 million in center-city schools since the consortium was founded a decade ago. During that time, enrollment in most of those schools has declined by at least 20 percent, according to the archdiocesan communications office.
An archdiocesan statement said deficits from the consortium schools add up to an average of about $7 million annually, and in five years the schools are projected to incur a deficit of an additional $56 million.
“The priority was to develop a plan so no school would close,” the statement said.
If the plan is enacted, none of the center-city schools will close. The four schools in the reconfigured Catholic consortium would be operated by the archdiocese and the remaining eight schools would come “under the umbrella of a charter school operator approved by, but independent of, the Archdiocese of Washington,” said the archdiocese.
Currently, the 12 center-city Catholic schools serve 2,200 children, 75 percent of whom are non-Catholic.
Monsignor Charles Pope, pastor of Holy Comforter-St. Cyprian Parish in Washington, said Sept. 7 that he received the proposal with sadness and understanding.
“We’ve been trying to sustain our schools for years now, and it’s simply become unaffordable to maintain the same number of Catholic schools. We had to make some tough choices,” he told the Catholic Standard, Washington’s archdiocesan newspaper.
Under the proposal, Holy Comforter-St. Cyprian School is one of the schools that would become part of the new values-based charter school group.
The priest said he would be conferring with his school community, his parish council and finance council in the days to come.
“We’ve tried mightily for the past 12 years to keep this (school) open and running. We’ve exhausted our resources,” he said. This year the school is projected to operate at a $269,000 deficit.
The archdiocese has had to subsidize the 789 students who receive the District of Columbia’s opportunity scholarships, or vouchers, to attend those schools. It pays more than $2,500 for each student to bridge the gap between the tuition costs paid by the scholarships and the actual cost of educating the students.
At the same time, the district’s vouchers program faces an uncertain future. In 2009 Congress must vote to reauthorize the program or stop funding it. This year about 36 percent of students attending the consortium schools are receiving the scholarships.
Archbishop Wuerl said the crisis facing the archdiocese’s center-city schools has been the most difficult issue he has faced since becoming archbishop of Washington last year.
“When the proposal was first made, it made me very sad. The thought that we would not be able to keep all the schools open as Catholic schools was a very hard thing to hear,” he said Sept. 10.
“What has softened this difficult news is the realization that none of the schools have to close. While some of them will no longer be Catholic, the kids, the children in the school, will have the same schools to go back to. The excellent academic education they are receiving will not be interrupted. That’s what gives me some hope,” he said.
Dan Curtin, executive director of the National Catholic Educational Association’s department of chief administrators of Catholic education, said he was also sad to hear the proposal to reconfigure the consortium, particularly since he had worked on the planning stages of the program more than 10 years ago as secretary of education for the Washington Archdiocese.
Curtin said the consortium faced several challenges including changing demographics, buildings in need of repair, increasing teachers’ salaries and parishes without the resources to continue to support their schools.
When he travels across the country and talks about Washington’s consortium model he cautions Catholic school systems that are considering similar models to keep them small.