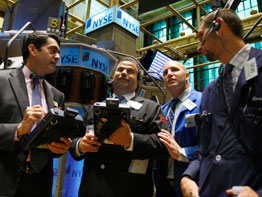 VATICAN CITY – The current global financial crisis illustrates why it is a mistake to build a life on passing realities like money and success, Pope Benedict XVI said.

“We see this today in the collapse of the great banks: This money disappears, it’s nothing. And so all these things we thought were real and were counting on are in fact realities of a second order,” he said Oct. 6, the day European stock markets plummeted following news of government bailouts for two more mortgage and banking companies.

“We need to change our idea of realism. The realist is someone who recognizes in the word of God, in this reality that appears so weak, the foundation of everything,” he said.

The pope made the impromptu remarks at the opening session of the world Synod of Bishops on the Bible. He said the morning’s Scripture readings had brought to mind Christ’s parable of the two houses, one built on sand and one built on rock.

“On sand is built only things we can see and touch: success, career, money. Apparently they are real, but one day they pass,” he said. He said the banking crisis demonstrated how quickly they can disappear.

“Whoever builds his life on these things – on material things, on success, on appearances – is building on sand,” he said.

The true realist is someone who builds his life on the things that remain, recognizing God’s place in his own life, he said.

Chicago Cardinal Francis E. George, president of the U.S. Conference of Catholic Bishops, said the pope’s reference to the banking crisis underlined an obvious contrast between eternal truths and the realities that occupy a great part of people’s lives.

“Here we have institutions – financial and political – upon which people relied as if they were ultimate,” the cardinal told Catholic News Service.

“There is nothing ultimate except God and the word of God, which is, as (the pope) said, more real than all the material dimension of creation that so preoccupies us,” he said.

Archbishop Claudio Maria Celli, president of the Pontifical Council for Social Communications, said at a press conference that the pope clearly was offering a spiritual reflection, not an evaluation of financial problems.

“The pope’s main theme was not the current economic situation, but the value and importance of the word of God in the human journey,” the archbishop said.

He said that although economic issues are important in human society, Christians sometimes forget that they are not the ultimate realities for man.