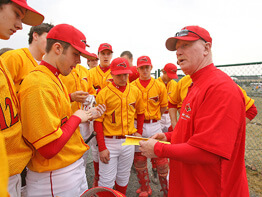 Over the past two baseball seasons, Calvert Hall College, Towson, has yielded an overall record of 58-9, collared back-to-back conference title championships and developed a system that turns out talented ball players year after year.

The man behind the magic is head coach, Lou Eckerl. Eckerl became the first coach to win Maryland Interscholastic Athletic Association A Conference titles at two schools: The Cardinal Gibbons School, Baltimore, his alma mater, and The Hall, carrying an overall win-loss record of 167-54.

A 1970 graduate of Cardinal Gibbons, Eckerl started his coaching career with the Crusaders and in 1976, led his junior varsity squad to a championship title. In the spring of 1982, Eckerl led the Gibbons varsity team through an unprecedented 18-1 record, a champion title and was named Coach of the Year.

Then, in 1982, Eckerl was offered the opportunity to serve as athletic director of Calvert Hall, where he now holds an 83-27 overall record over six seasons as well as the back-to-back championship titles.

“When I got involved with the baseball program after my first year here, I had the wonderful experience of working with Joe Binder for 15 seasons as his assistant,” said Eckerl. “I think that’s when I learned about the Calvert Hall Way.”

“The biggest thing we preach to our players is to respect the game of baseball,” said Eckerl. “You do that by practicing and playing as hard as you can every opportunity that you get, so that your level of play is always getting better.”

After a miracle season in 2005, when the team lost their first game of the season and then reeled off 32 consecutive wins, Eckerl praised his team, saying, “The 2005 team had chemistry. There were no distractions. The goal was simply to win and in their minds, they would never doubt their ability to win.”

Now, in 2007, with the loss of six graduating seniors, The Hall is ready to reload and go for a ‘three-peat.’

“On paper the team looks wonderful this year,” said Eckerl. “We lost our two big guns in Joe Vellegia and Patrick Carmen, but we have kids in the wings ready to go.”

With the likes of Nick Caddick, Reid Chenworth, Jeff Guthridge, Kevin Lingerman and John Collingsworth, the Cards are ranked No. 2 in the preseason polls with a tough team from Archbishop Spalding, Severn, (6-0) nipping at their heels and ranked third, while Mount St. Joseph, Irvington, is ranked No. 6.

“Both Spalding and St. Joe will be right there. It will be a dog fight this year,” said Eckerl.

When asked about his recipe for success, Eckerl just smiled and said, “If you keep winning, people want to come out and play for you, but you have to have great kids. Great kids are going to win ballgames and our job is to lead them in the right direction.”
Eckerl praises his long-time varsity assistants Brooks Kerr, Timmy Ford, Josh Itso, John McKay, Chris Bengel, who coaches the junior varsity team and Dustin Sparks who coaches the fresh-soph team. All of Eckerl’s coaches are Calvert Hall graduates.

“I have great confidence in my coaches,” said Eckerl. “I know they are with me every step of the way over the last six years and I know things are done the right way so that when kids get to me, they are prepared.”

The Calvert Hall athletic program continues to receive support from 1948 Calvert Hall alum Carlo L. Crispino, who has recently decided to donate funds for the improvement of the baseball complex.

“Phase One of this project will be turfing the entire field, except for the mound and batter’s area,” said Eckerl. “Then, we would love to see additional bleachers installed and maybe a little picnic area and eventually we would love to have locker rooms right there at the field.”

When asked if he was having fun, Eckerl ever so humbly just smiled and said, “Absolutely, it doesn’t get better than this.”