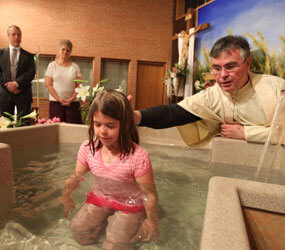 Jesus’ revolutionary spirit was alive and well during Easter weekend in the Archdiocese of Baltimore.

Father Michael White, pastor of Timonium’s Church of the Nativity, said during his weekend message that Jesus was not the benign figure some make him out to be in popular culture. Jesus, he said, made enough enemies that he was imprisoned, convicted and condemned to death.

Most of all, Father White said, “Jesus was dangerous because he conquered death. He was willing to suffer and die to overcome death. He found a way forward for all of us through death. Jesus took that very thing that we fear most and he made it into a sign of victory. He took the very thing his enemies tried to use against him and he turned it into the ultimate sign of victory.”

Christ’s presence, Father White said, forever changed people. That spirit was on full evidence in the archdiocese as the church welcomed a record 1,081 people into the faith April 3.

As Jill Phillips and two other catechumens stepped toward the baptismal font at Our Lady of Mount Carmel in Essex during its Easter Vigil, she dabbed away joyful tears.

“It’s a big step in your life,” Phillips said. “Giving yourself to another faith, God accepting me, getting a fresh start, there’s a lot going on. … It’s a blessing itself, to be up on the altar and able to make another commitment.”

Phillips, 37, was motivated by the younger two of her three children – Aaron, 12, and Aysia, 8. Both attend the parish’s elementary school.

“I’ve always been a Christian, but I wanted to be on the same page as my kids,” Phillips said.

Her husband, Richard, was on the road with their oldest, Anthony, a college freshman who was playing in a basketball tournament. Phillips enjoyed their long-distance support and the warm embrace of a new faith community, which includes RCIA instructor Kathy Rushton and associate pastor Father John Rapisarda.

“Both were very welcoming, not judgmental at all,” Phillips said. “When I walked in, they treat you as if you’ve been there your entire life.”