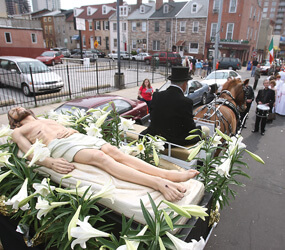 Holy Week 2009 will go down as one of the most memorable and joyful for many pastors and parishioners throughout the archdiocese, as nearly 900 people were received fully into the Catholic Church during the April 11 Easter Vigil – the biggest number in a decade.

Their welcome into the faith was a high point in a week of solemn liturgies that marked Christ’s last days on earth, his passion, death and resurrection.

Many parishioners used the special season to reach out to those in need as they also renewed their own faith and celebrated rich traditions that stretch back many years.

Conventual Franciscan Father Paul Zaborowski fought back tears several times during the baptism of 16 young people at St. Ambrose in Park Heights. The group, ranging from 9 to 17, was joined by three adults who became members of the faith as well.

“I give my life in service to the church and this is what it’s all about,” the pastor said. “I told them we rejoice through the whole archdiocese because the church is growing. There is life and Jesus is still calling people.”

St. Ambrose Catholic School principal Pamela Sanders served as sponsor for two of her students at the Mass.

Father Zaborowski said one sixth-grade student, Erica Nelson, recruited several of the new young Catholics by inviting them to various parish ministries through the years. Erica, a member of the dance and choir ministries, is a reflection of young hope, according to Father Zaborowski.

“She’s our greatest fan,” he said.

The pastor said St. Ambrose is changing lives in the often-difficult neighborhood that surrounds the parish.

“It’s hard to find the positive sometimes,” he said, “but we broke the darkness out there.”

Similar joy was felt at St. Margaret in Bel Air, where 37 people were received into the church.

“The church was packed and standing room only,” said Richard Gatto, St. Margaret’s director of faith formation. “It was amazing to watch the congregation’s response to the RCIA people. There was almost a sense of pride in their eyes. It was really inspirational.”

Father Jeffrey Dauses, pastor of the Basilica of the National Shrine of the Assumption of the Blessed Virgin Mary in downtown Baltimore, said his parish welcomed candidates and catechumens for the first time in recent history at the Easter Vigil.

Twenty-five people joined the Catholic Church through the sacraments of baptism, Communion and confirmation at Holy Trinity.

Father J. Bruce Jarboe, pastor of the Glen Burnie parish, believes people are responding positively to the parish’s ministry of reaching out and forging connections with people.

“I also think that those who are received into the church do so because of the witness of their family members, friends and neighbors who are Catholic and present a very appealing presence about what the life of faith is all about,” he said.

In his Easter Vigil homily at the Cathedral of Mary Our Queen in Homeland, Archbishop Edwin F. O’Brien called the vigil the “most important liturgical celebration of the church year.”

He highlighted the example of candidates and catechumens, seven of whom he received into the church that night, as examples to “us cradle Catholics.”

“We are bolstered by your enthusiasm and your faith as all of us renew our own baptismal promises,” Archbishop O’Brien said.

On the Easter Vigil, believers are “sacramentally one with that earliest, apostolic church and with the faithful throughout the world in experiencing the presence of the risen Christ,” he said.

“We probably had about 60 percent more people than we normally have on the weekend,” explained Conventual Franciscan Father Donald Grzymski, pastor, noting that number included visiting families and people who attend church on major holidays but not Sundays.

However, he has seen a slight upturn in numbers in the last few months. During the archdiocesan Light is On For You campaign, the parish saw people return to confession after years away from the sacrament.

On Holy Saturday, people had their baskets of Easter food blessed in an Eastern European tradition called swieconka, according to Father Grzymski. More people had food blessed this year than in recent years.

Asked if the economy had influenced people to return to the church, Father Grzymski said, “I think sometimes tough times do make us reflect on lasting values and ways to make sure we have something to give ourselves a sense of peace and stability when we’re worried about other things going on.”

Those worries didn’t stop St. Clement parishioners from supporting the church and the world. In addition to the Easter collection and the Good Friday collection for the Holy Land, Father Grzymski said the parish also had containers for relief efforts in Italy after the recent earthquake.

Outreach to those in need was on the minds of many.

More than 72 children from Catholic Charities’ St. Vincent’s Center in Timonium were thrilled to receive new Easter outfits this year. For the last 10 years, Geri Olsen, a volunteer who’s a parishioner of St. Joseph in Cockeysville, has been organizing the Easter outfit drive for children who have been abused and often suffer serious behavioral, psychiatric and/or emotional problems.

“I feel very fortunate with my own life, so I feel the need to help others,” Ms. Olsen said. “With having eight grandchildren of my own, how could I not want to help other children?”

She said St. Vincent’s does a great job caring for the children, and that it’s nice to help them make each child feel special.

Dressed in their Easter finery, the children participated in an Easter service in St. Vincent’s chapel.

“The children are just so proud and feeling really good about themselves,” said Ms. Olsen, noting she has “a wonderful network of generous people who make this possible.”

Nearly 40 children from Sarah’s Hope in Baltimore City had a day filled with Easter delight on April 9.

In the morning, pre-schoolers of the St. Vincent de Paul of Baltimore-run organization had visitors from Woodberry Crossing, an organization that uses the natural environment to educate and foster esteem among urban children. The children were elated to learn about baby chicks.

After lunch, a group of young people from Our Lady of the Chesapeake in Lake Shore visited the shelter for homeless women and children, bringing with them arts and crafts, Easter goodies and even the Easter bunny.

“If you want to see St. Vincent de Paul and its mission, you should have been here to see all the smiling faces,” said program director Sheila Matthews.

She said events like this help take away the “feeling of homelessness” for children.

“The children feel part of the norm,” she said. “Because normally on Easter, parents and families do special things. Just because you’re in a shelter doesn’t mean special activities still don’t happen.”

Many Catholics remembered the sanctity of human life on Good Friday when they participated in outdoor Stations of the Cross led by Archbishop O’Brien that started at St. Alphonsus in Baltimore and ended at a Planned Parenthood abortion clinic on Howard Street.

As at least seven women entered the clinic April 10, about 200 Catholics stood on the opposite side of the street and peacefully prayed for them and their unborn children.

“Lord Jesus Christ, stripped of everything, you stood exposed to the jeers and contempt of the people whom you loved,” Archbishop O’Brien prayed at the 10th Station, using a bullhorn to raise his voice above the din of clanging light-rail trains and downtown morning traffic.

“Clothe us with genuine love of others, so that nothing we suffer may ever fill our hearts with hatred or bitterness,” he said.

Teens who carried a large wooden cross throughout the procession planted the sacred object on the sidewalk and turned it to face the abortion clinic as participants prayed the final stations. Looking back at them were signs in the windows of Planned Parenthood that featured smiling women and children, along with the slogan, “Every child a wanted child.”

The juxtaposition of the happy faces on the signs with what was happening inside the clinic was ironic to many of the marchers, some of whom volunteer in crisis pregnancy centers and know the pain that abortion causes. “When we’re out there on the street, people see us and it causes them to think,” said Ruth Dawkins, a pro-life coordinator at New All Saints in Liberty Heights who participated in her eighth Good Friday prayer walk. “It definitely makes a difference.”

As Ms. Dawkins spoke, a woman dressed in ragged clothes approached her and asked what brought so many people out on a Friday morning.

“We’re praying for an end to abortion,” Ms. Dawkins said.

“Yes, ma’am, that’s good,” the woman responded with a smile. “They tried to make me get rid of my child, but I didn’t do it. You’re doing a good thing.”

The pilgrims prayed the sorrowful mysteries of the rosary and the Divine Mercy chaplet to conclude the event.

Like other priests, Father John B. Ward, pastor of Our Lady of Hope, said there were “big, big” crowds at Easter liturgies at his Dundalk parish.

“My wish is that they will all come back,” he said.