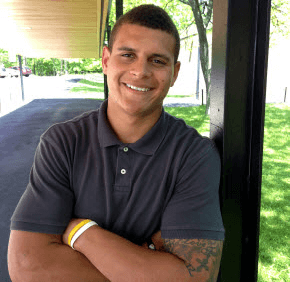 By Maria Wiering
mwiering@CatholicReview.org
Twitter: @ReviewWiering
In elementary and middle school, most academics were difficult for Quincy Redmon. He was good at math, but reading was frustrating.
“I always just got passed on,” he said. “I just never understood or comprehended. I was definitely behind everybody, and I couldn’t understand why.”
That ended in eighth grade, when he entered Bishop Walsh School in Cumberland. He’s called it “a life-changing experience.”
Teachers took notice of his struggles, and suggested he be tested for dyslexia. The positive test was a relief, he said.
“I knew something had to be wrong, that I wasn’t just dumb all the time,” he said.
Now, school is a breeze, said Redmon, the son of Annette Redmon, of Keyser, W.Va.
Ann Workmeister, Bishop Walsh vice principal who taught Redmon literature and language arts in eighth grade, said he has always been a curious student with an enthusiasm for learning.
In high school, he developed tools to work with his dyslexia, such as asking more questions and requesting additional time for tests.
“He has been an extremely hardworking and diligent student,” Workmeister said. “He realizes that he learns differently … but he just gets it done.”
Without the dyslexia diagnosis, he likely would not be going to college, said Redmon, who has a 3.0 GPA. Because of Bishop Walsh’s support, he is bound for West Virginia University in Morgantown, W.Va., with plans to play football and prepare for a career in law enforcement. If professional football doesn’t pan out, he wants to be a state trooper, he said.
His learning disorder is not the only hurdle the 19-year-old Redmon has overcome. Nine years ago, he took a bad hit while playing football, and his right leg was paralyzed for about a year. Doctors thought he would recover his ability to walk, but not to play sports, he said.
He proved them wrong. At Bishop Walsh, he played football, basketball, baseball and track, and overcame another injury during his junior year.
The area’s head basketball coaches named him the Cumberland Times-News 2012-13 Basketball Player of the Year. The power forward was also named Appalachian Mountain Athletic Conference (AMAC) Player of the Year and first-team Cumberland Times-News All-Area, All-AMAC?and All-City.
He was also named to first-team All-Area in football as a linebacker. He also played wide receiver.
Redmon’s childhood recovery convinced him of God’s hand in his life, he said, and his Catholic faith continues to shape the person he is.
“My faith is me; that’s what I’m all about. I can definitely express it here (at Bishop Walsh),” said Redmon, who attends St. Mary’s Church in Cumberland, part of Our Lady of the Mountains Parish. At school, Redmon participated in the Community Outreach Program, campus ministry and Catholic Heart Work Camp. He plans to be involved in campus ministry in college.
Going to West Virginia University is “a dream come true” for Redmon, who, as an in-state student, is a Mountaineer football preferred walk-on with plans to play as a tight end.
Bishop Walsh taught him not only to be an athlete, but a student-athlete, and take academics seriously, he said.
“That competitive drive is something that he uses to really push himself academically,” Workmeister said. “Quincy is smart and curious, and those things together really work to help him achieve what he has.”
Read about more 2013 stand-out grads here.
PrevNext