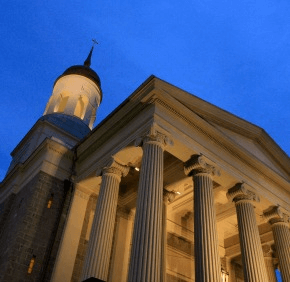 In August the Vatican instituted an online reservation system for pilgrims wanting to enter St. Peter’s Basilica through its Holy Door during the extraordinary Holy Year of Mercy.

No such steps will be necessary in the Archdiocese of Baltimore, where eight sites will serve as pilgrimage destinations during the jubilee that begins Dec. 8, the feast of the Immaculate Conception of the Blessed Virgin Mary.

Holy Years are usually held every 25 years, the last being the Great Jubilee of the Year 2000. According to Catholic News Service, extraordinary holy years like this one also highlight “special celebrations and pilgrimages, strong calls for conversion and the offer of special opportunities to experience God’s grace through the sacraments, especially confession.”

“In both the Gospels and early fathers of the church, the door, the gate, is a favorite image,” noted Father Michael Roach, pastor of St. Bartholomew in Manchester.

“In the medieval church, the door/gate motif was joined to the concept of Jubilee that really dates back to Jewish practice. In the last 65 years, the church has utilized Jubilee Years and the Holy Doors much more frequently.”

At St. Peter’s Basilica, the Holy Door, located to the right of the main entrance, is opened at the beginning of a jubilee year. According to CNS, between Holy Years it remains sealed with bricks “as a symbolic reminder of the barrier of sin between human beings and God.”

At the beginning of a Holy Year, the pope opens the door to signal the start of a special year of grace and pardon. Pope Francis did so Dec. 8, the same day changes to the annulment process instituted by him go into effect and staff at the archdiocesan Catholic Center will offer a day of service.

On Sunday, Dec. 13, the holy door rite will occur in the archdiocese at the eight pilgrimage sites. Like the papal basilicas in Rome, those visiting those sites, while receiving the sacraments of reconciliation and the Eucharist, can receive a plenary indulgence, which according to the Catholic Church’s Code of Canon Law is “the remission of the temporal punishment for sin, the guilt of which is already forgiven.”

Details on what is planned for the Holy Door rite on Dec. 13 at the archdiocesan sites follows.

Basilica of the National Shrine of the Assumption of the Blessed Virgin Mary, Baltimore

The more than 40 in the archdiocese who have registered for what should be the largest Catholic pilgrimage of 2016, July’s World Youth Day gathering in in Krakow, Poland, are invited to the 4:30 p.m. young adult Mass Dec. 13 at the nation’s first Catholic cathedral, to be celebrated by Baltimore Archbishop William E. Lori.

The Seton Shrine’s Door of Mercy will open at 1:30 p.m. Mass. Father Frank Sacks, shrine chaplain and celebrant of that Mass, will present a series of homilies on different aspects of mercy at Sunday Masses from Jan. 17 through Feb. 7.

In addition, the sacrament of reconciliation will be offered at the shrine during the Holy Year, Sunday through Friday, from 12:15 p.m. to 1:15 p.m.

Cathedral of Mary Our Queen, Homeland

The Holy Door rite will be part of 9:30 a.m. Mass, to be celebrated by Archbishop Lori. That Mass includes a Children’s Liturgy of the Word (CLOW), and the Cathedral parish expects some its young people to accompany the archbishop as he blesses the doors from the outside and then enters the cathedral.

The Holy Doors will be open 10 minutes before Sunday Mass throughout the Holy Year as well as on Thursdays for 5:30 p.m. Mass. During the Holy Year, that will serve as the votive Mass for World Peace and Justice.

(That same day, from 5 p.m. to 6:30 p.m., the cathedral choir will present Lessons and Carols. According to its website, the service, “reminiscent of its English heritage, is sung in a candlelight setting.”)

Established in 1763, the oldest parish in the archdiocese will symbolically open its doors not just before all five of its Sunday Masses Dec. 13, but on “Walk-in Wednesdays” throughout the Holy Year, beginning January if not sooner.

“We’re in a downtown location, with a lot of foot traffic,” said Father Kevin Farmer, pastor. “We’ll have the church open every Wednesday, 10 a.m. to 2 p.m., with a member of the pastoral staff available, to talk. Some people are alienated from or upset with the church, others might be curious.

“Some have a pastoral need. Right now, it could be days before we respond to some of those requests. We’re making a commitment; if someone has a need for a priest, we’ll be in touch within 24 hours.”

Father Farmer said his parish will also supplement the adoration it offers every Wednesday from 3-8 p.m. with intercessory prayer for specific requests.

The Harford County parish will designate its Holy Door at the oldest church in use in the archdiocese. After noon Mass in its parish church, Monsignor James Barker and his congregation will process to the structure that opened in 1792, pray the solemn rite of the opening of the Holy Door, then have exposition of the Blessed Sacrament through 7 a.m. the next day, Dec. 14.

(The choirs from St. Ignatius Hickory and St. Margaret in Bel Air will present a Christmas Concert at St. Ignatius Dec. 13, at 3:30 p.m.)

Yellow and white (the papal colors) bunting will hang around the Holy Door. Inside, a special prayer handout will be available.

The Holy Door rite will be observed at St. John Neumann, a mission of St. Mary’s, at 11 a.m. Mass.

Founded by St. John Neumann in 1848 and later pastored by Blessed Francis Xavier Seelos, Ss. Peter and Paul will open its door Dec. 13 at 3 p.m., for an Hour of Mercy.

Capuchin Franciscan Father Gregory Chervenak, pastor of Our Lady of the Mountains, said that during the Holy Year the shrine will begin a women’s holy hour of adoration (6-7 p.m.) on the first Sunday of the month, in addition to the men’s holy hour it recently began on the second Sunday.

Special events include a live nativity Dec. 12 and 13, at 7:30 p.m.; a Jan. 17 opening Mass and veneration of relics of St. Maximilian Kolbe on the 75th anniversary of the martyrdom of the Conventual Franciscan; and a day pilgrimage June 11, the feast of St. Anthony.

Holy Year is a reminder to put mercy before judgment, pope says