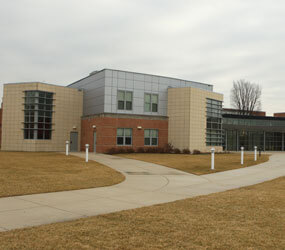 Archbishop Spalding High School in Severn and The John Carroll School in Bel Air are not letting the down economy get them down. In spite of the nation’s economic recession and the plight of many Catholic schools in the Baltimore archdiocese to stay afloat, these two schools have moved forward in their visions for improvements to their facilities.

“Phases two and three of the ‘Transforming Dreams’ capital campaign are just about completed now,” said Kristen Koehler, director of alumni and media relations for Spalding.

Phase two produced a new arts and technology building, said Koehler. The new building houses four new classrooms and two state-of-the-art art studios. Of four new computer labs, one is a Macintosh lab, while another is a PC lab.

Last year’s Spalding Spring Sensation Auction and Dinner, headed by director of advancement Katy Caruso, raised funds to furnish the new building with computers, art supplies and desks, among other things. “The total (raised) – amidst the recession – was $230,000,” Koehler said, adding how “extremely blessed and fortunate” the school feels to have such support.

The director said phase three involved the construction of a new stadium and athletic field with astroturf on 22 acres of farmland adjacent to the school. The land, Upton Farm, was purchased as part of phase one, the school’s first-ever capital campaign, “Expanding the Spirit,” completed five years ago.

Now, as phase three comes to a close, Spalding is one of the only high schools to have a Jumbotron video score board, Koehler said. She added a new track will surround the football field, and new bleachers will seat 1,800.

A project of similar magnitude is beginning about 45 minutes north of Spalding. A recent press release called the John Carroll project “the largest and most ambitious project in the 45-year history of the school.”

John Carroll president Richard O’Hara said a feasibility study was done about a year ago. He said the school plans to “take another year to reach out and get a grip on what we can accomplish,” with the goal of breaking ground in 2012 and completing as much as possible by 2014.

“The master plan reflects, most importantly, the school’s Catholic identity,” said O’Hara. “We want to move the chapel front and center to a more prominent location. That’s a distinguishing feature obviously you would not see if you walk into Bel Air High School.”

“Additionally,” read the press release, “the school plans to construct a memorial grotto adjacent to one of the two ponds on the campus as a shrine honoring the Blessed Mother.”

O’Hara said the plan “attends to the academic, athletic, and artistic experience of the students,” calling each “equally important.”

He said the plan will move away from the teacher-centered traditional classroom, which “plays only to one style of teaching,” and toward spaces “set up for the latest teaching techniques.”

He said a new “library/learning center will be the hub, the center of intellectual exchange, of academic life,” adding the space could lend itself to small group meetings, as well to a lecture hall setting.

A new stadium and turf field, along with the creation of more gathering spaces for community members, are also planned.

O’Hara hopes to expand the theater space to seat 1,000 as opposed to the current 600 in order to have the entire student body seated at once. “We could have Mass in there,” he said. “Right now, it’s in the gym.”

The plan also addresses quality of life, with the goal of expanding and renovating the cafeteria “to enhance community life,” he said.

He explained the school is in the advanced gifts phase of planning: “We’re reaching out to a lot of people, past parents, friends of the school, alumni.”

As for challenges posed by the economy, O’Hara called them “beyond our control.”“I didn’t want to stop envisioning the future for this school,” he said. “When the economy recovers, I want to be ready. You’ve got to have a dream. I wanted to start giving that some concrete appearance, some concrete goals. That’s the purpose of all this.”