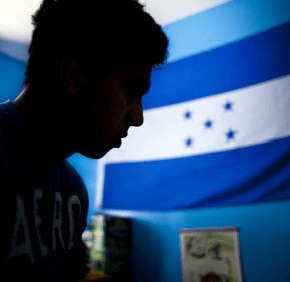 With dreams of becoming a nurse or entering the business world, “Carlos” recently enrolled at Frederick Community College.

Because he is in the country illegally, however, the 21-year-old student and longtime Marylander isn’t eligible to pay the in-state tuition rate. His bill for one semester of classes stands at approximately $4,000, not counting books and supplies.

“I can’t afford it,” said Carlos, who asked that his real name not be used. “Instead of going to school, I’m working for a cleaning company for my uncle. That’s not bad, but it’s not what I expect of my life – just cleaning my whole life.”

For Carlos, the Maryland DREAM Act, signed into law last year by Gov. Martin J. O’Malley and strongly supported by Maryland’s Catholic bishops, is a lifeline to a better future.

The controversial measure allows immigrants – documented and undocumented – to receive the in-state tuition rate if they have spent three years of high school in Maryland and if they or their parents have paid Maryland state income taxes for each of those three years.

Students may transfer to a four-year state college or university at the in-state rate after completing 60 credit hours. Students who are not permanent residents must provide an affidavit stating they will file to become permanent residents within 30 days of becoming eligible to do so.

The DREAM Act will go before Maryland voters in a November referendum and is receiving support from Catholic leaders in the face of intense opposition.

Cardinal Edwin F. O’Brien believes students who would benefit from the DREAM Act are “making the right choices” in pursing higher education. The reality is that they are likely to remain in the country, he said, which puts it in the best interests of all that they be encouraged to contribute to society.

“One of my greatest disappointments to date is that we don’t have our Catholic people on board in realizing that once we were strangers in a foreign land,” Cardinal O’Brien told the Catholic Review.

Christian justice demands concern for immigrants searching for work and a meaningful life, he said – for those “who face unjustified legal obstacles because the politicians are afraid to address this correctly.”

“We can’t let them down,” Cardinal O’Brien said. “We have to speak up for them.”

Del. Patrick L. McDonough, a parishioner of St. Ursula in Parkville and a member of the House of Delegates representing parts of Baltimore and Harford Counties, has been one of the most vocal critics of the law. He was a proponent of a petition drive that collected 132,000 signatures in 60 days – well more than what was needed to put the DREAM Act on the ballot.

McDonough believes the measure violates federal immigration law. Those who come to the United States illegally are “committing a criminal act, regardless of what the situation is in their country,” McDonough insisted.

“To me, the rule of law is important,” McDonough said. “A lot of people are supporting this bill on emotion and illusion. Emotionally, they feel it may be a good thing and it sounds like the compassionate thing to do. The illusion is that they are discounting that there is a federal (immigration) law that exists that is just as strong and just as credible as the federal Civil Rights Act.”

Mary Ellen Russell, executive director of the Maryland Catholic Conference, acknowledged that many people have a legitimate concern about what she called the “broken immigration system in our country.”

“The young people who are affected by the issue came here as minors for the most part,” said Russell, who represents the state’s bishops in Annapolis. “It wasn’t their action that broke the law. They came here through no fault of their own and they deserve a chance like their classmates.”

Cronin said she doesn’t know what the answer to illegal immigration is, but she believes it doesn’t lie in breaking up families and putting higher education out of reach.

“These are people who want to make a difference in their lives,” said Cronin, herself an immigrant from the Philippines. “Why not give them the opportunity?”

For Carlos, improving his life is all about honoring the sacrifices his mother made for her family. The single mother fled Honduras in the late 1990s after losing everything in a hurricane. After a long separation from her young son, she was finally able to bring him to the United States when he turned 11.

Carlos attended public schools in Germantown and Frederick, while his mother earned money cleaning offices and apartments. His younger sister also received a public school education in Maryland, and is currently maintaining a perfect grade point average at her Frederick-area high school.

Carlos’s sister hopes to become a medical doctor, an ambition hampered by the same tuition challenges burdening her older brother.

“I’ve lived here since I was 11,” Carlos said. “I was raised here and went to school here. I’m just looking for better opportunities. We’re not taking jobs from other people.”

Debate over the DREAM Act referendum is expected to heat up in the coming months and Maryland Catholic Conference leaders are prepared for the fight.

They established an inter-diocesan task force among the Archdiocese of Baltimore, the Archdiocese of Washington and the Diocese of Wilmington to educate Catholics on the issue. A Facebook page, “Justice for Maryland Immigrants” has been created. Three training sessions have also been held to prepare volunteers in support of the DREAM Act.

“Going forward, we will have more of those meetings in the community and parishes (to talk about the) specifics of what the bill does and who is affected by it,” said Chris Ross, associate director for social concerns with the Maryland Catholic Conference.

The MCC pointed out that in addition to helping immigrants, the DREAM Act benefits military veterans who register within four years of discharge. While bill opponents such as McDonough say the act will cost the state too much money, bill proponents said the measure would cost $778,000 in 2014 – increasing to $3.5 million in 2016.

Catholic leaders see support for the DREAM Act as another milestone in a long tradition of the Catholic Church “welcoming the stranger.”

“It’s about fairness,” Russell said. “It’s about embracing the immigrant and it’s about the past and the future and our church.”

Elizabeth Skalski contributed to this story.