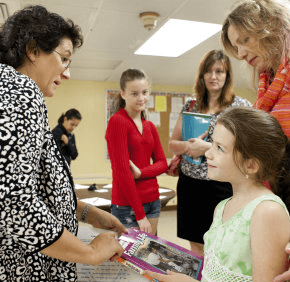 By Elizabeth Lowe
elowe@CatholicReview.org
Twitter: @ReviewLowe
Amy Spessard, Nathan Nocket and Shaun Guevarra never envisioned working full-time at their parishes in Frederick, Harford and Anne Arundel counties, respectively, but God had other plans.
Representative of the hundreds of lay ministers in the Archdiocese of Baltimore, the director of religious education, youth minister and pastoral associate, respectively, talked to the Catholic Review about their roles in church ministry.

Amy Spessard
Spessard’s favorite part of serving as the director of religious education at St. John the Evangelist in Frederick is interacting with parishioners.
“I really enjoy spending time with families and ministering to them,” said Spessard, 43.
A parishioner of St. John the Evangelist for 21 years, she has been its DRE since July 1. For the previous five years she had served as director of evangelization and sacramental catechesis.
As the DRE, Spessard works with the marriage preparation program and adult confirmandi. She oversees the parish’s religious education program for kindergarten through fifth grade and sacramental preparation for first Communion and reconciliation.
“Anything that involves educating youth or adults I have my hands in,” said Spessard, a married mother of three children, ages 13, 15 and 18.
Before St. John, Spessard worked as a laboratory technician at Fort Detrick in Frederick, then was a stay-at-home mom for 13 years.
Spessard is motivated by “the sense of mission, the sense that you’re lucky enough to find something to do in a career that you love.”

Nathan Nocket
Nathan Nocket sees his role as the youth minister at St. Joan of Arc in Aberdeen as his vocation.
“This is what God has gifted me and equipped me for,” said Nocket, 21, the youth minister since July 1.
A St. Joan parishioner for most of his life, Nocket is an alumnus of its parish school and Calvert Hall College High School in Towson. He earned a bachelor’s in theology from Mount St. Mary’s University in Emmitsburg earlier this year.
Nocket ministers to youths and young adults in middle school through college. He organizes teen nights and presents events, activities and lessons to them.
He also works with confirmation students and teaches eighth grade religion at the parish school.
“My job,” Nocket said, “is to help bring our young people into the life of the parish, helping them create a community of young Catholics who are faithful.”
Nocket planned to pursue culinary school until 2008 when he attended the archdiocese’s High School Leadership Institute (High-LI), an annual program for teens that works to enhance their leadership skills and help them to be church leaders.
“God really reached into me and started to call me to work for the church,” he said.

Shaun Guevarra
Shaun Guevarra worked for about a decade in aerospace engineering before making a dramatic career shift.
Guevarra, who previously worked as a rocket scientist at Lockheed Martin and owns a Washington, D.C.-based river taxi business, has served as the pastoral associate at Resurrection of Our Lord in Laurel since October 2012.
“It’s definitely answering God’s call,” said Guevarra, 32.
A parishioner of Resurrection for about 10 years, Guevarra previously served on the pastoral council and worked with its youths and young adults from 2008 to 2012. Guevarra and his wife, Donna, have served on Resurrection’s youth ministry core team since 2010.
He is a deputy grand knight of the parish’s Knights of Columbus Council No. 14099.
As the pastoral associate, Guevarra oversees the confirmation program, works with youths, youth adults, adult faith formation and the Rite of Christian Initiation of Adults.
“It’s a lot of fun,” Guevarra said. “You work with a great group of people with dynamic backgrounds. Who thought a rocket scientist would be working at a church?”
Also see:
Pizza, beer and politics
Patriarchs and silent pearls
PrevNext