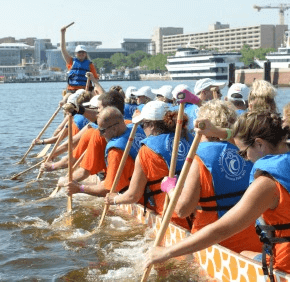 By Maureen Cromer
mcromer@CatholicReview.org
The sun was shining and there was not a cloud in the sky as hundreds of people lined the walls of Rash Field in Federal Hill Sept. 10 to watch the 2016 Catholic Charities Dragon Boat Races.
At the biennial races, 31 businesses and organizations from across Baltimore sponsored teams. That translates to 1,000 paddlers and 27 races benefiting Catholic Charities of Baltimore.
Since early July, the teams had been meeting for two hours every week at the Baltimore Marine Center in Canton to go through a grueling training process.

Each participating team partners with and raises money for a program served by Catholic Charities. In total, this year’s Dragon Boat Races raised more than $700,000 for Catholic Charities’ programs.
Father Andrew DeFusco, associate pastor of the Cathedral of Mary Our Queen in Homeland, was a member of his parish’s rookie team.
“This is our first year participating,” he said. “We had no idea what we were getting into, but it’s such a great event and we are having a great time. No matter what we do today, in terms of racing, we are so glad and proud to have raised almost $10,000 for Gallagher Services. We already feel like we’ve won.”

The Cathedral of Mary Our Queen and the Archdiocese of Baltimore both teamed with Gallagher Services, a program providing services and support to adults with developmental and intellectual disabilities.
Lauren Jackson, a fourth grade teacher at the School of the Cathedral, was also a member of the cathedral team.
“I grew up going to Baltimore Catholic Schools,” Jackson said. “I’ve always heard about this event and wanted to participate. It’s also been a great way to get my kids excited about service. I explained to them what Gallagher Services do and some of them are even out here today cheering me on.”
In keeping with Chinese tradition, the opening of the Dragon Boat Races included an “Awaken the Dragon” ceremony. Archbishop William E. Lori and William McCarthy Jr., executive director of Catholic Charities, dotted the eyes of the dragon heads on each boat. It was traditionally believed the mythical beasts were “awakened” and had “come to life” through the ceremony. The eye dotting was to impart the boats and their crews with the strength of the dragon.

“This is a great event and I am always happy to be here,” Archbishop Lori said. “This race is supported by not only church institutions, but also by the community, corporations and foundations. That goes to the fact that Catholic Charities serves not only the church, but also the whole community and does so with a heart that is full of faith.”
“Seeing all of these people come together out here is just so supportive of our mission of improving the lives of Marylanders in need,” McCarthy said. “You have companies who are building teamwork and relationships and fellowship. The healthy competition in the water really strengthens the partnership between the companies and organizations in our program and helps them understand what our neighbors in need really face. At the end of the day, it really raises money in support of our mission. It’s a movement, not a race, to improve lives.”
T. Rowe Price took home the 2016 Dragon Cup by edging out M&T Bank by .06 of a second. The real winners, according to those present, were all those who volunteered their time and abilities to support a good cause.