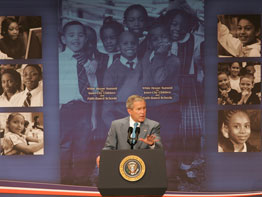 One day after attending an April 24 White House summit on preventing faith-based schools from closing in the inner-city, Dr. Ronald J. Valenti, Baltimore superintendent of Catholic schools, welcomed a renewed proposal from President George W. Bush to establish a “Pell Grant for Kids.”

First mentioned in his January State of the Union address, President Bush told about 250 summit participants the grant would provide $300 million in scholarships to “children trapped in failing public schools.”

President Bush said the program would be similar to grants offered to college students.

“We have to look at some way of stabilizing and providing an insurance of some kind of supportive means so our schools can continue providing service to the community,” said Dr. Valenti, who was invited to attend the meeting with educators, school lobbyists and business and government representatives from across the country. He also participated in an April 23 summit reception.

“If the Pell grant idea is one way of doing that, we have to try to advance it,” Dr. Valenti said. “We’re at a standstill, and it’s better than not having anything.”

Dr. Valenti acknowledged that the grant proposal is unlikely to go very far in an election year that will soon see a change in presidential administrations. But he praised federal leaders for raising the issue.

“At least it keeps the dialogue going,” he said.

According to the National Catholic Educational Association, enrollment in Catholic elementary schools has dropped 15 percent nationwide since 2001-02, and more than 212 U.S. Catholic schools were closed or consolidated during the 2006-07 school year. White House officials noted that from 2000 to 2006, nearly 1,200 inner-city faith-based schools closed, displacing about 425,000 students.

In the Archdiocese of Baltimore, 14 Catholic schools have closed in the last 12 years, according to Dr. Valenti.

In his 30-minute address, the president said faith-based schools in America’s cities are “a critical national asset.”

“We have an interest in the health of these institutions,” the president said, noting that he hoped the summit would highlight the problem and let people know “it’s in the country’s interest” to help these schools stay open.

The president also stressed the importance of continuing the federally-funded school choice program in Washington, which requires reauthorization by Congress in 2009.

He called attention to tax credits, particularly Pennsylvania’s Educational Improvement Tax Credit, a program in which businesses can contribute to school scholarship programs for low-income students. With the strong backing of Maryland’s Catholic bishops, a similar program called BOAST (Building Opportunities for All Students and Teachers in Maryland) has been proposed for the Free State.

The president highlighted innovative Catholic school programs already in place, such as Cristo Rey schools, which provide a work-study program where high school students help pay their tuition; Jubilee Schools in Memphis, Tenn., where eight Catholic schools that had been closed have recently reopened; and the University of Notre Dame’s Alliance for Catholic Education, known as ACE, which places college graduates as volunteer teachers in Catholic schools.

While the summit included representation from a variety of religious traditions, the vast majority of participants were from Catholic schools, according to Dr. Valenti.