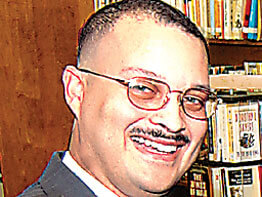 Dr. B. Curtis Turner, who recently served as principal of The Seton Keough High School in Baltimore, has been appointed principal of St. Frances Academy in Baltimore. He succeeds Sister Marcia Hall, O.S.P., who is stepping down after completing her three-year commitment in the position.

Dr. Turner, a parishioner of St. Joseph in Largo, said he is excited to serve as principal of the coeducational high school, a historically African-American institution founded by the Oblate Sisters of Providence in the early 19th century.

“I want to make sure their spiritual heritage stays strong at the school,” said Dr. Turner, a lay associate member of the religious order founded by Mother Mary Lange.

Oblate Sisters have served as his spiritual advisors, Dr. Turner said, and he is inspired by their commitment to Divine Providence. He plans to encourage all members of the school community to learn about the order’s spirituality, he said.

Dr. Turner will be an “excellent role model” for students – especially as the first African-American man to lead St. Frances Academy, according to Sister John Francis Schilling, O.S.P., president.

“He understands Catholic education and the mission of our school,” Sister John Francis said.

The new principal will be responsible for the day-to-day operation of the 320-student school. One of his goals is to make sure students with different learning styles have their needs met in the classroom, he said.

A former recipient of the Doris Musil Award for Excellence in Catholic Education and Leadership, Dr. Turner was principal of Seton Keough from 2001 until recently. He is the former vice principal of the Washington High School of Science, Math and Technology in Washington, D.C..

Dr. Turner holds a bachelor’s degree in physics and master’s and doctorate degrees in education from the Furcolo School of Education at the University of Massachusetts. He has previously served on the faculty of the Williston Northampton School in Western Massachusetts and was an engineer for NASA. At St. Frances, Dr. Turner intends to teach a pre-calculus class at St. Frances Academy.

Dr. Turner will be ordained a permanent deacon for the Archdiocese of Washington in June. He begins his position at St. Frances Academy that same month.