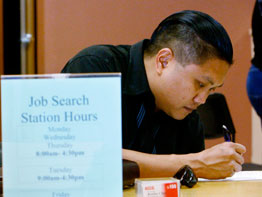 WASHINGTON – Behind the grim statistics about the nation’s rising jobless rate are men and women who need help, according to Catholic Church officials and economists at Catholic universities.

One immediate response to the nation’s high unemployment rate should be an extension of unemployment benefits, said Tom Shellabarger, domestic policy adviser for the U.S. bishops’ Department of Justice, Peace and Human Development. He called it “unconscionable” that by the end of the year the unemployment benefits will run out for close to 2 million workers.

According to the U.S. Labor Department statistics released Nov. 7, the jobless rate rose to 6.5 percent in October when employers fired 240,000 workers. That figure put the total number of unemployed Americans past 10.08 million, the highest level in 25 years. More than 22 percent of the nation’s unemployed have been out of work for six months or longer – something which also has not happened in 25 years.

One year ago, the jobless rate was 4.8 percent. Many economists are saying the rate could climb to 8 percent or 8.5 percent by the end of 2009.

In a letter this fall to House and Senate leaders, he asked members of Congress to “remember the low- and middle-income Americans whose lives and economic security are being shattered by the current economic crisis.”

He specifically called on them to extend unemployment benefits and to increase food stamp benefits and social service assistance.

Unemployment benefits were created in 1935 in response to the Great Depression as a means to provide partial wage replacement to unemployed workers while they looked for a job. Unemployed workers can get these benefits – administered by the states – for up to 26 weeks. On occasion, the federal government has extended the number of weeks these benefits are available. This June, Congress extended the program by 13 weeks.

Congressional Democrats are currently pushing for a further extension of unemployment benefits in a new stimulus package.

Mr. Shellabarger said he was looking forward to working with Congress on legislation to help the unemployed even if a larger stimulus package does not get passed.

But he also sees problems with the way unemployment figures are measured and said the system “needs an overhaul,” especially since it was designed when people primarily worked 40-hour weeks. Now, some people work less but want to work more or work on a contractual basis and therefore do not qualify for unemployment benefits.

“How do we make sure people that are part of the workforce yet can’t find work get the money they need to feed themselves and maintain shelter?” asked Mr. Shellabarger in a Nov. 13 interview with Catholic News Service.

Economists have likewise stressed the need to help low-income families in the complexities of this economic crisis.

Steve Conroy, an associate professor of economics at the University of San Diego, said, “As Catholics, we must consider the human side of this economic crisis, particularly the impact of economic policies on workers and their families.”