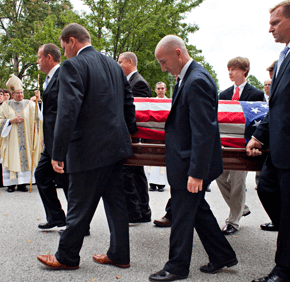 By Paul McMullen
pmcmullen@CatholicReview.com
Twitter @ReviewMcMullen
Art Donovan was a national folk hero who found a home in Baltimore, but never forgot his roots.
A funeral Mass for Donovan, the first Baltimore Colt elected to the Pro Football Hall of Fame but best known for his storytelling on network TV’s late night variety shows, was held Aug. 9 at the Cathedral of Mary Our Queen in Homeland.
Near the end of his homily, auxiliary Bishop Denis J. Madden talked about Donovan’s last days at Stella Maris Hospice in Timonium, where he received a visit from a fellow native New Yorker, Cardinal Edwin F. O’Brien, archbishop emeritus of Baltimore.
“Cardinal O’Brien was in town from Rome,” Bishop Madden said. “He told Art he was a BIC, a ‘Bronx Irish Catholic.’ Dorothy, Art’s wife, said he was so proud of that.”
Donovan, 89, died Aug. 4.
To view a slideshow, navigate the arrows below.
He left the University of Notre Dame to enlist in the U.S. Marine Corps during World War II; became a seminal figure with the Baltimore Colts when they were among the nation’s most popular sports franchises; and provided the town with comic relief between the departure of the Colts to Indianapolis in 1984 and the arrival of the Ravens in 1996.
Hundreds came to his home parish to worship and hear about Donovan’s iconoclastic humor and devotion to country, family and God.
One photograph in the funeral program showed Donovan, enjoying a belly laugh, alongside a quote from Blessed Teresa of Kolkata: “Let us always meet each other with a smile, for the smile is the beginning of love.”
Bagpipes played outside the cathedral before and after the liturgy, which was preceded by a eulogy given by the Rev. Joe Ehrmann. Donovan was a star defensive tackle in the 1950s. Ehrmann played the same position for the Colts in the 1970s.
Ehrmann spoke on behalf of Donovan’s sister, Joan; his widow, Dorothy; their five children and seven grandchildren. While the nation knew him as a sit-down comic, entertaining millions alongside Johnny Carson and David Letterman, those closest to him recounted his bedrock values.
Some family sentiments, as relayed by Ehrmann:
“Our father loved his family more than himself.”
“No autograph line was too long for Dad.”
“He loved children. He felt so sad for the sick and disadvantaged. He had a profound capacity for the crippled, distraught and sad, and those who did not enjoy the same benefits he had.”
“He loved his God. He was the consummate patriot, and thought the United States was the greatest place in the world.”
In his homily, Bishop Madden referenced Donovan’s self-deprecation and openness.
“He endeared himself to people the same way Pope Francis does, with humility and humanity,” Bishop Madden said. “People love to be around those who love them. Love is the most powerful force in the universe … God is love.”
Mourners included Donovan’s teammates on the Colts’ 1958 and ’59 NFL championship teams, such as fellow Pro Football Hall of Famers Raymond Berry, Gino Marchetti and Lenny Moore, and Jim Mutscheller; Colts from Ehrmann’s era, such as Bruce Laird, Lydell Mitchell and Stan White; and stars who bridged those eras, such as Tom Matte.
Gov. Martin J. O’Malley was in attendance. The Friendly Sons of St. Patrick came in kelly green blazers. Others wore Donovan’s blue Colts 70 jersey, the same one on display in the sanctuary.
Retired Bishop William C. Newman presided with Bishop Madden, who passed along the regrets of Archbishop William E. Lori, who was out of town.
Concelebrants included Monsignor J. Bruce Jarboe, cathedral rector; Father Joseph Breighner, Catholic Review columnist and in residence at the cathedral; Father C. Lou Martin, the pastor of multiple parishes in Glen Burnie; and Redemptorist Father Robert Harrison, pastor of Our Lady of Fatima in Baltimore.
Of those four, Father Harrison was the only one who did not know Donovan.
“It’s my day off,” Father Harrison said. “My parents were season-ticket holders for the Colts, the same way my brother and I are season-ticket holders for the Ravens, so I know the attraction his Colts had on Baltimore.”
PrevNext