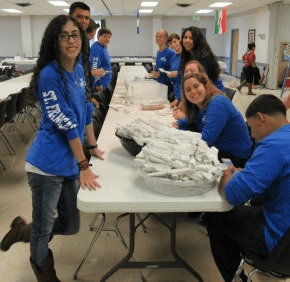 The more than 200 Archdiocese of Baltimore youths traveling to Indianapolis for the 2015 National Catholic Youth Conference have some differences.

Sean Carey, 17, a parishioner of St. Ignatius of Loyola and senior at Oakdale High School, both in Ijamsville, is a baseball player active with the Fellowship of Christian Athletes.

Matthew Trulli, 14, goes to Edgewood High School, and, after moving from the children’s to the adults’ choir as a fifth-grader, now serves as a cantor at St. Francis de Sales in Abingdon.

Both youths, however, see the trip, coordinated by the archdiocesan Division of Youth and Young Adult Ministry, as a massive opportunity to draw strength from similarities.

Carey, who first attended the conference two years ago, said he was amazed “just seeing that there are kids around the country who share the same beliefs I have.”

The Nov. 19-21 conference has adopted the theme “Here I Am Lord/Aquí Estoy Señor,” with corresponding keynotes on the Blessed Virgin Mary’s answer to God’s call as well as Jesus’ response to his Father. On the final day, Carolyn Woo, president and CEO of Baltimore-based Catholic Relief Services, will discuss her answer to God’s call in her life.

Attendees will also have opportunities to attend Mass, Eucharistic adoration, prayer workshops and concerts, as well as receive the sacrament of reconciliation.

St. Ignatius and St. Francis are sending large numbers to the conference, 23 and 25, respectively.

Diane Lewis, coordinator of elementary catechesis and youth minister for St. Francis, said that the young parishioners who attended the biennial NCYC in 2013 returned home from the experience eager to share “what they heard, saw and did.”

To that end, they led a retreat for younger parish youths at which they shared just that.

The retreat became an annual affair, and parish interest in the NCYC grew.

“I believe this is the largest group we have taken to the NCYC in the last 10 years,” Lewis said, adding that St. Francis has also been working on uniting its Anglo and Latino youth.

Viviana Cajigas, 17, a senior at Patterson Mill High School in Bel Air, is one of eight (four Anglo and four Latino) members of the parish youth council.

She will be attending the NCYC for the first time, but last year she attended the Baltimore Youth Catholic Conference, also biennial, held in Ocean City on “even” years.

“It calmed me down,” said Cajigas, who had been recovering from the loss of a friend. “Being connected to God helped me through that dark time.”

Brianna Pacheco, a 17-year-old parishioner and peer minister at St. Ignatius, will also attend the NCYC based on her experience at the conference’s Baltimore counterpart.

“I took away a lot of close friendships, as well as the realization that there is a God and we are all connected,” she said, adding that she expects the same and more from the NCYC.

“I feel like it’s going to be something special that I’ll remember,” she said.

“I’ve never done something like this before; I’ve never been away for so long,” he said. “It’ll be something different.”