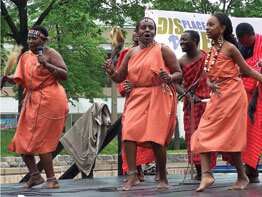 Imagine walking two miles to collect water, then two miles home, carrying 20 gallons on your head. Now imagine repeating the process for each person in your family over a rocky and hilly terrain.

That’s the reality for the women of Uganda, yet surely is not the worst aspect of their lives.

In a voluntary project, the Archdiocesan Youth Advisory Council (AYAC) held a Displace Me Rally April 27 in Baltimore’s Inner Harbor. A combined effort of teens from two parishes, two public high schools and four Catholic high schools, the rally helped to raise awareness for the 1.4 million displaced people in northern Uganda as a result of the country’s 22 years of Civil War. The bloody conflict between the rebel Lord’s Resistance Army and the Ugandan government emerged in the aftermath of the 1986 overthrow of President Tito Okello, an ethnic Acholi, by forces from southern Uganda.

The biggest issue is safety of the children – some of whom are forced to be soldiers – and the displacement of citizens who are forced to leave their homes.

“It was wonderful to see so many young people passionate about an issue that really is far removed from their lives,” said Mark Pacione, director of youth and young adult ministry. “Their willingness to stand up and speak out for displaced people in Uganda is the kind of activity that we expect from Catholics.”

During the four-hour event, about 1,500 blue “passports” with the most updated information known about the inhumane issue were distributed to passers-by.

Learning stations were set up along the perimeter for visitors to peruse, addressing questions like: what about the war?, what is displacement? and what is the solution for peace? Other stations included Beads for Life, writing to legislators, face painting and a graffiti wall for the public to record prayers and personal commitments.

“We were surprised a lot of people were interested,” said Mary Bosley, 18, a Sacred Heart, Glyndon, parishioner who co-chaired the event with Katie Smalley, a parishioner of Church of the Resurrection, Ellicott City. Planning began in September.

A demonstration simulated the transport of water over rough terrain, as carriers followed an obstacle course with large water coolers atop their heads. On stage, African drummers and the Wasafiri Dance Group from St. Matthew, Northwood, added color, movement and sound to the awareness effort.

“Originally we set out to change just one person’s heart,” said Mary. “We definitely reached our goal, if not surpassed it.”
CNS contributed to this story.