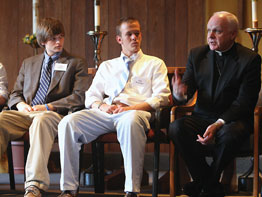 While polishing off chicken and large baked potatoes smothered in sour cream, Peter and John Hill seemed absorbed in the ever-changing conversation at their table that touched on everything from indulgences to the merits of the Latin language.

Seated with several teens and young adults who are discerning a call to the priesthood, the Hill brothers listened intently as a college student shared how he just joined the church after years as an agnostic. A priest talked about his love for kayaking while another cleric explained how he found his vocation later in life and joined a religious order.

As active parishioners of St. Alphonsus Rodriguez in Woodstock with several priest friends, the home-schooled teens said they know priests don’t spend all their lives somberly praying. But it was still eye-opening to hear firsthand how men of the cloth – and future men of the cloth – enjoy sports, good food and fun like anyone else.

John and Peter, 17, were two of 24 young people who gathered at the Monsignor O’Dwyer Retreat House in Sparks for a vocations supper and mini-retreat with Archbishop Edwin F. O’Brien. Youth ministers from across the archdiocese encouraged their parishioners to attend the annual event, and some of the ministers were present with their parish representatives.

Father Gerard Francik, vocations director, said turnout at this year’s dinner was the biggest in more than a decade and probably the biggest ever.

After dinner, participants gathered in the chapel to listen to priests and seminarians tell their vocation stories and answer questions about the priestly life.

Archbishop O’Brien said he was attracted to the priesthood through the example of the priests of his home parish in New York. Everything revolved around the parish, he said, and it was easy to identify with priests.

The archbishop said he loves every minute of his priesthood and he encouraged his audience to be open to God’s call.

“You just place yourself in God’s hands and say whatever presents itself is God’s will and I’ll do it,” he said, noting that he never dreamed that he would one day become the archbishop of Baltimore.

“I’ve found that much simpler than trying to make great plans for yourself,” he said.

“I saw that the priests were a group of guys who had good times, lots of laughter, but who were also helping people when they were struggling,” he said.

In response to a question from one young man who said he was struggling between choosing marriage and the priesthood, Father Francik encouraged him to pray and think about the life that will best serve God.

“That’s what makes discernment so tough,” he said, noting that marriage and the priesthood are both good ways to lead a holy life.

“It’s more about what fits and thinking about where you feel most fruitful and where you will do the most good,” he said.

Father Francik said signs of a priestly vocation usually center on a desire of the heart that doesn’t go away.

“There’s no bolt of lightning,” he said.

Finding it difficult to choose between devoting himself to a pro-life ministry or the priesthood, Keith Hamilton, a 17-year-old parishioner of St. Ignatius, Hickory, asked for advice about choosing between the two.

Father Francik responded by suggesting that he could do both.

“I really think he helped me step outside the box and think maybe I can do both and maybe they do work together,” Keith told The Catholic Review.

Keith said he was encouraged to see other young men like himself in discernment.

“I was thrilled to openly ask questions and I felt very comfortable getting insightful answers,” he said.