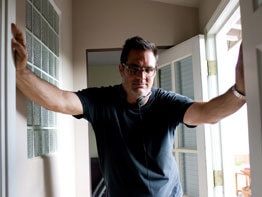 WASHINGTON – Film director and Baltimore native Mark Pellington chose a tale about love and loss as his latest movie project to deal with his own love and loss.

The title character in “Henry Poole Is Here” is ready to drink himself to death in the dilapidated house he has just bought upon receiving the diagnosis of a terminal illness. Mr. Pellington’s wife, Jennifer, a film costumer, died four years ago and he took to alcohol to numb his spirit until, by his own calculation, he got sober two years later.

In the film opening Aug. 15, Poole’s turnaround begins, although he doesn’t know it, when one neighbor sees the image of Christ – due in part to badly done stucco work – on an exterior wall of the house.

The change in him accelerates when a blood stain of inexplicable origin appears on the wall, and it goes into high gear when another neighbor’s young daughter starts talking again following a year of silence after her father abandoned the family.

Mr. Pellington’s release from the grip of sorrow came in his work. While hedging his bets with different film, television and video projects in varying stages of development, he told Catholic News Service in an Aug. 12 telephone interview from Los Angeles, “I was kind of hoping this would be the one.”

“It contained a lot of the elements I had been searching for. Loss, I could relate to that – not Henry and his possible demise, but Esperanza (the first neighbor) and the loss of her love (a man who had died in the house Henry bought), and the little girl who was shut down – and do a story where I could put together the range of feelings and express the small emotional details,” he said.

“The process of actually making it and processing it and mixing it was quite cathartic,” Mr. Pellington added. “Watching it the other night, I was in another place (in life). I leaned over to a friend and said, ‘Wow, this is really sad.’ It contained all the sadness I had a year ago.”

As director of a “charming fable,” Mr. Pellington “sustains a suspenseful, sometimes poetic, generally unsentimental mood, not without humor,” said a review by Harry Forbes, director of the U.S. bishops’ Office for Film & Broadcasting. “This little gem of a film with its truthful emotions, likable characters, and themes of faith and community concern – even when Henry commits a desperate act – should resonate warmly with Catholic viewers.”

The film, which stars Luke Wilson, Radha Mitchell, George Lopez and Cheryl Hines, received a classification of A-II – adults and adolescents – from the film and broadcasting office for “two instances of profanity and a few crass words.”

Mr. Pellington, 46, the son of the late Bill Pellington, a linebacker for the Baltimore Colts, was raised an Episcopalian. He went to St. Paul’s School for Boys in Brooklandville, sang in the school choir and went to chapel once a week.

He wanted to follow in his father’s football footsteps until a high school injury dashed that dream. He admitted his churchgoing dropped off in his 20s, but he picked it up again once he got married. Today, it’s “sporadic,” and while “I believe in God and Jesus Christ completely,” he told CNS, “I rely on more than the church for my inspiration to question both the good and bad handed to me in life.”

Mr. Pellington got into the business through an internship at MTV in 1983, followed by a full-time job there in ‘84.

For the first award he ever got, he said his mother and his father went up to New York. “My mother told me he was more proud of me than anything me or my brother had ever done in sports,” he said.

Mr. Pellington directed videos for such acclaimed bands as U2 and Pearl Jam before branching out to television and film.

He’s been a consultant for nearly 70 episodes of the CBS drama “Cold Case,” and his latest announced project is as producer and director for a film titled “Electric God,” starring Nicolas Cage as a man living in isolation forced to deal with his violent temper when he has to reach out to others.

Backers of “Henry Poole Is Here” have mounted a campaign to win Catholic endorsement of the film. Outreach has been made to such groups as the Knights of Columbus, the National Federation for Catholic Youth Ministry and Lifeteen, according to Corby Pons of Different Drummer, a Washington-based promotion firm.

Renew International’s Theology on Tap has published a six-page study guide to the movie.