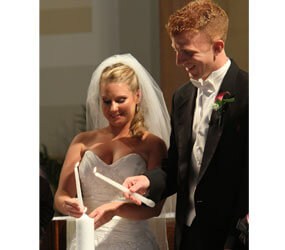 WASHINGTON – Despite a recent Pew Research Center survey that found a growing number of Americans – now 39 percent, up from 28 percent in 1978 – think marriage is becoming obsolete, family ministers across the country say they believe marriage remains a strong institution.

And they’re taking steps to keep it that way.

“That (survey) says that over 60 percent agree that marriage is not becoming obsolete,” said Bill Boomer, executive director of the Department of Marriage and Family in the Cleveland Diocese. “The majority of first marriages still last. It is still possible to be married for a lifetime.”

Professional ministers such as Boomer, while not buoyed by the survey’s results, told Catholic News Service that they believe marriage will survive, but he acknowledged they must come up with ways to impress upon young generations the important role marriage plays in society.

They also say the Catholic Church’s view that marriage can only exist between one man and one woman is important to share with modern-day culture.

“If we don’t get that message out, that Christian message out, the next few years, our culture will have succeeded in defining marriage for us,” said Lorrie Gramer, co-director of the Family Life Office in the Diocese of Rockford, Ill.

The Pew survey examined a wide range of issues related to marriage and families. In addition to finding that nearly four in 10 people consider marriage less important as an institution, the survey also revealed that slightly more than half – 52 percent – of all adults were married in 2008 compared with 72 percent in 1960.

The decline in marriage has occurred primarily based on educational background. By a 64 percent to 48 percent margin, college graduates are more likely to be married than people with a high school diploma or less.

While people in both groups were just as likely to say they want to marry, according to the survey, people with a high school diploma or less placed a higher premium on financial stability as a very important reason to marry.

Meanwhile, 69 percent of those surveyed said the trend toward more single women having children is bad for society. At the same time, 61 percent said a child needs both a mother and father to grow up happily.

Chris Codden, director of the Office of Marriage and Family in the Diocese of St. Cloud, Minn., said efforts are under way nationwide to stress the positive aspects of marriage in everyday life.

“We have to make marriage look healthier and more appealing to young people,” Codden told CNS.

Parish-based programs in St. Cloud also focus on how marriage is portrayed to children.

“We’re particularly looking at how we help parents teach their children not only about sexuality but about the beauty of marriage,” said Codden, who is president of the National Association of Catholic Family Life Ministers.

Such efforts require that married couples have more prominent positions in parish life, Gramer explained, pointing to a diocesan marriage initiative in Rockford that will involve the formation of marriage ministry teams in each parish.

Much of the Rockford effort is focusing on marriage as a social institution as well as a sacrament of the church. The effort is incorporating various aspects of the For Your Marriage initiative of the U.S. Conference of Catholic Bishops.

“We just wanted to get more recognized visibility,” Gramer told CNS. “We wanted to give that witness to those people who are there, especially to young people.”

Judy Clark, co-director with her husband, George, of Family and Adult Ministry and Counseling Services at St. Mark Parish in Plano, Texas, echoed Gramer’s view that it is important to show young couples the value of marriage over cohabitation.

With U.S. Census Bureau statistics showing that cohabitation before marriage has nearly doubled since 1990, Clark and her colleagues know they have a huge task ahead. The Pew survey found that 44 percent of all adult respondents – and more than half of all adults 30 to 49 years old – say they have cohabited before marriage. Of those who have done so, 64 percent said they saw cohabitation as a step toward marriage.

“I think it’s very important to have an invitational attitude with our young people,” she said. “If you come in heavy-handed, you can lose them.”

But in a secular society with changing norms, how does the church’s approach to marriage education, support and preparation continue to bear fruit if people are finding the institution less important?

It comes down to faith and religious values, said Boomer in Cleveland. It’s in those areas where he believes the church can make a difference.

“In the last couple of years, I’ve been becoming hopeful both because of the (bishops’) national initiative and these local things,” Boomer added. “I don’t feel alone anymore. I see more parishes doing marriage enrichment things. It’s better than keeping our heads in the sand.”