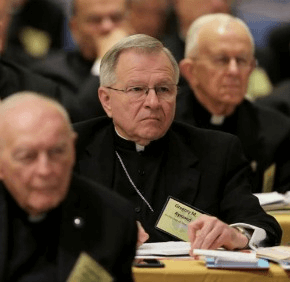 By Nancy Frazier O’Brien
Catholic News Service
BALTIMORE – The Year of Mercy proclaimed by Pope Francis is a particularly appropriate time to raise awareness about Project Rachel, the Catholic program that helps people heal in the aftermath of an abortion, three cardinals told their fellow bishops Nov. 16.
Cardinals Sean P. O’Malley of Boston, Donald W. Wuerl of Washington and Timothy M. Dolan of New York made an informational report on Project Rachel on the first day of the U.S. Conference of Catholic Bishops’ annual fall general assembly in Baltimore.
Criticizing those who call abortion an “unforgivable sin” and “wrongly claim that the church condemns individuals who are involved in abortion,” Cardinal O’Malley said such “misrepresentations are dangerous” because they may keep people from coming to the church for assistance and healing after an abortion.
“God’s mercy is freely available and cannot be denied” to anyone who seeks it, he said.
Cardinal O’Malley said 57 million abortions have been performed in the United States on an estimated 45 million women since abortion became legal in 1973. Since Catholics make up about a quarter of the U.S. population, “10 million Catholic women may have been involved in legal abortion in the past 43 years,” he said.
Add to that the fathers and grandparents of those unborn children, as well as the medical professionals involved in abortion, and the enormity of the problem becomes evident, he said.
Speaking directly to those affected by abortion, he said, “Allow me to express my personal sorrow. I encourage you to reach out for help.”
Cardinal Wuerl described the elements of the diocesan-based Project Rachel ministry.
“It is not one-on-one counseling, it is not solely a priestly ministry versus a lay ministry, it’s not simply a sacramental approach versus therapy,” he said. “It’s all of the above.”
With Christ as its foundation, Project Rachel includes training, prayer, support, outreach and awareness and confidentiality, he said. It offers professional counseling and referrals, reconciliation and referrals to priests, pastoral and spiritual guidance, liturgies and retreats, and support groups, he added.
Noting that “every diocese does not have the resources for every aspect of this approach,” Cardinal Wuerl said the USCCB, “with the great support of the Knights of Columbus,” makes available to dioceses a variety of training options, a resource manual, national websites in English and Spanish, a national referral line, social media tools, and liturgical resources.
The national websites at https://hopeafterabortion.org and https://esperanzaposaborto.org “received half a million unique visits last year – just one indication of how many are seeking help,” he added.
Cardinal Dolan noted that Pope Francis had given priests throughout the world the power to absolve the sin of abortion in the sacrament of reconciliation during the Year of Mercy, which begins Dec. 8. But “almost all of us (in the United States) had already granted our priests these faculties,” he said.
He said priests should offer “words of genuine welcome to penitents who come to confess the sin of abortion.”
He quoted the words of a woman who had an abortion but then went to Project Rachel in her diocese. “Do I still feel sadness and sorrow? Yes. But do I live my life in shame and guilt? No.”
The Archdiocese of Baltimore is sponsoring a one-day Project Rachel retreat Nov. 21 in Ellicott City. For more information, call 410-625-8491 or email projectrachel@archbalt.org.
See also:
High court’s ruling prompts bishops’ pastoral plan for family, marriage
Bishops, in draft statement, call pornography ‘mortal sin’
‘Faithful citizenship’ revisions reflect words of Popes Benedict, Francis
PrevNext