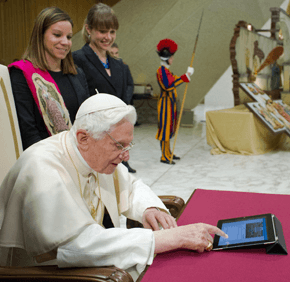 By Carol Glatz
Catholic News Service
VATICAN CITY — Though he prefers to use pencil and paper, the pope emeritus is fascinated by high-tech tools.
Retired Pope Benedict’s personal secretary, Msgr. Georg Ganswein, told reporters yesterday that the pope shows great interest in the monsignor’s iPad.
“When I show him something on the iPad, and I’m making the information slide by on the screen with my fingers, these new technologies pique his interest from time to time,” he said.
The 57-year-old monsignor said the retired pope “doesn’t think these things are ruled out for an elderly person” like himself.
In fact, some may remember, Pope Benedict became the first pope in history to own an iPod when Vatican Radio staff gave him a 2-gigabyte white nano in 2006.
When the head of the radio’s technical and computer services department identified himself and handed the pope the boxed iPod, the pope was said to have replied, “Computer technology is the future.”
It’s doubtful he’s ever used the iPod, even though it was loaded with works by his favorite composers, like Mozart.
He never used the laptop he got as a gift just a few days after he broke his right wrist in 2009, preferring to use a voice recorder instead to put down his thoughts and ideas.
But he tapped away with no problems when presented with a tablet launching the very first @Pontifex Twitter accounts and tweets almost exactly one year ago today, and when he inaugurated the Vatican’s online news portal, news.va in 2011.
He also lit the world’s largest electronic Christmas “tree” from a Sony S Tablet two years ago from his papal apartment.
Though he isn’t immersed in the digital world, Pope Benedict repeatedly endorsed it as the new frontier for evangelization.
Pope Francis, too, is no digital native. As most people know, he prefers phone calls and letters to IM and email.

Pope Francis launches the smartphone app Missio during an audience with national directors of pontifical mission societies May 17 at the Vatican. The free app features homilies from Pope Francis as well as Catholic news from the Vatican’s missionary news agency and other providers. (CNS photo/L’Osservatore Romano via Catholic Press Photo)
When he was archbishop of Buenos Aires, he once said that he would try to start using the Internet when he retired. Obviously a plan that now may be delayed. Though he launched the Pontifical Mission Societies’ Missio App in May, he, like his predecessor, needed close coaching to figure out what to press on the iPad’s smooth button-less screen.
See also:
In conversations with parishioners, pope reveals he once was a bouncer
PrevNext