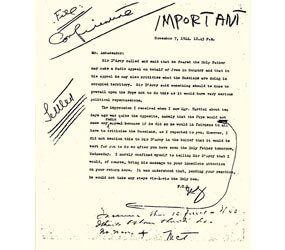 VATICAN CITY – Schools where Christians and Muslims study together, as they do at many Catholic schools in the Middle East, should be supported and cherished by both communities because they promote dialogue and lead to real friendships, said dialogue participants.

Delegations representing the Vatican and the Royal Institute of Interfaith Studies in Jordan met in Rome May 18-19 to discuss “human and religious values shared by Christians and Muslims for a common education.”

A statement released May 20 by the Pontifical Council for Interreligious Dialogue said participants affirmed that “Christians and Muslims share basic human values like the sacred character of human life, human dignity and the fundamental inalienable rights deriving from it.”

They said even some strictly religious values are shared by Christians and Muslims, although other tenets of faith are not. Religious education programs must make those differences clear, but without “antagonism or conflict,” they said.

“Helping the youth to be well rooted in their own religious identity,” participants said, leads to a secure self-identity that is not threatened by others.

The Vatican press release said delegates pointed particularly to the importance of private and public schools and universities where Muslims and Christians study together.

“Such an experience is to be conserved and cherished, also because it gives the occasion to create strong and permanent friendships,” the press release said.