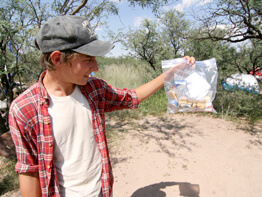 ARIVACA, Ariz. – After an immigration reform bill stalled in Congress in June, experts predict that it may take another two years before any meaningful attempts at fixing the situation will see the light of day.

Meanwhile, families remain divided, and lives continue to be lost in the desert.

If you ask people working in the desert, they’ll tell you that water can be deadly.

For people crossing the desert, this kind of blister will get them left behind in a hurry.

“Rains make this time of year more dangerous,” said Joe Shortall from Los Angeles, volunteering with No More Deaths, a humanitarian group that patrols the Arizona desert looking for illegal immigrants left behind by smugglers.

Rainfall and sweltering heat made crossing the Sonoran Desert as dangerous as ever for illegal immigrants this summer. The U.S. Border Patrol’s Tucson sector reported finding 186 bodies so far this year, 26 more than at the same time last year.

Yet the number of humanitarians and Border Patrol agents patrolling the desert continues to grow, and the Border Patrol, reporting the apprehension of fewer illegal immigrants this year, estimates fewer crossings.

“Despite the increase in presence, there’s an increase in deaths,” said Franciscan Brother David Bruer, who walks desert patrols with No More Deaths on the weekends.

Walt Staton with No More Deaths didn’t think changes in the weather were enough to explain the increase in deaths this year.

“Every mile of fence creates a more dangerous situation for those people who are crossing,” he told The Catholic Sun, newspaper of the Diocese of Phoenix. “It’s meant to be a deterrent, but it hasn’t happened. It’s not going to happen.”

Current security measures include building walls and beefing up enforcement near large, urban centers. According to an August 2001 report by the U.S. Government Accountability Office, the strategy has diverted immigrants away from the Border Patrol to more remote regions of the desert.

“Traffic patterns really do ebb and flow in reaction to where we respond,” Haber said. “We need to still do what we’re hired to do.”

The reason why the Border Patrol places particular emphasis on urban centers is because border-crossers are able to “blend into the environment of that surrounding community,” she said.

“In our estimation, the erection of a border fence would force migrants, desperate to find employment to support their families, to seek alternative and more dangerous ways to enter the country, contributing to an increase in deaths, including among women and children,” he wrote.

“The U.S. Catholic bishops are supportive of efforts to enforce immigration law and secure our borders, as long as the mechanisms and strategies applied toward this end protect human dignity and protect human life,” Bishop Barnes added.

Whatever the cause, the church and humanitarian groups such as No More Deaths continue their efforts aimed at preventing death in the desert.

“What our church is trying to teach us is that we are in the midst of a humanitarian crisis, and we need to respond with love and compassion,” said Brother Bruer of the San Xavier del Bac Mission in southern Arizona.

At the Arivaca camp Sept. 4, a beat-up thermometer measured the 101-degree temperature while a baby tarantula nestled into the waterproof awning overhead.

On the afternoon patrol, Staton and Dane Rossman from New Jersey hiked through the desert, passing clothes, empty water bottles and Red Bull energy-drink cans that those crossing the border had left behind.

“I always say it’s good when we don’t find anyone. It means there wasn’t someone in need on that trail,” Staton said.

“But we’ll keep coming out there until we have a whole summer without finding anyone,” he added, “until there are no more deaths.”