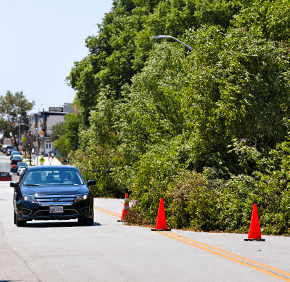 The storm network that swept across Illinois to the Atlantic coast June 29 mangled the tents, food stands, game booths and performance stages that were in place for the annual event in the western Howard County town of Clarksville.

“All of this was full this morning with trash, broken tents,” said Tony Kopera, the picnic’s general chairman, gesturing across the expanse of lawn between the church and Clarksville Pike.

In its 134th year, the Clarksville Picnic is one of the largest parish festivals in the Archdiocese of Baltimore. It began in the 19th century as a harvest celebration, and now includes concerts, big prize raffles and games such as mini golf, a dunking booth and a moon bounce.

The event requires 900 volunteers, Kopera said. In many cases, a family has managed the same food or game booth for decades.

At the heart of the event is a fried chicken dinner that draws thousands, with the same cucumber salad Jennie Thompson, 93, has been making for generations. She made 14 bushels for this year’s event, she said.

The storm whipped through the Clarksville area around 10:30 p.m. June 29. When Kopera visited the church at 2 a.m., the campus had just regained power. Only four of 35 stands remained operable, and live wires from the public address system dangled in the wreckage.

“What happened last night was that all those stands blew up, and when they came down they cracked and broke up. The covers flew off of them. Some were on the street. Just devastated everything,” Kopera said.

After assessing the damage, Kopera called off chicken frying and met with other parish leaders to discuss options for the picnic. The fresh chicken – enough for 3,400 meals – was donated to local charities and the dinner was cancelled.

The scheduled entertainment, pony rides and bingo were also cancelled. The picnic’s leaders decided to open the events held in the air-conditioned St. Louis School, including a craft sale, book sale, white-elephant sale, and Christmas store, as well as the silent auction.

Without the tents to provide shade in the predicted 100-degree heat, they considered cancelling all of the outside events, Kopera said.

By 7 a.m., more than 50 people were cleaning the parish grounds, removing debris and the damaged booths, tents and sound equipment. Instead of abandoning their food booths, some families moved their stands to the only remaining big tent, where the parish was also selling the picnic’s side dishes by the quart.

Bill and Jennifer Steier were among those who refused to let the storm dampen their day. With a “the show must go on” mentality, the couple sold five flavors of Edy’s ice cream for $1.50 a cone.

When they showed up to work at 7 a.m., their stand was “halfway up the road,” leaving only the cooler already packed with ice cream.

“I called (Jennifer) and said, ‘Everything’s a disaster, but we’ll have the picnic anyway,’” Bill Steier said. He told other volunteers, “I have everything, and we need to scoop ice cream.”

In years past, their booth has sold 80 gallons over the course of the picnic, Steier said. The crowds were noticeably smaller and the day felt different, they noted, but a steady line kept the Steiers’ ice cream scoops in hand.

“It’s the best day of the year,” said Jennifer Steier, who has been running the ice cream stand for 18 years, since she was 22 years old.

Several parishioners expressed concern about how a smaller crowd and fewer booths would affect the picnic’s revenue. As a fundraiser, the picnic could bring in a $100,000 profit, Kopera said. He didn’t want to dwell on the money, though, he said.

The day demonstrated the parish’s persevering spirit, said Eileen Sobus, who has volunteered at the picnic for 51 years.

“Sometimes we are just tried a little bit, and we came through,” she said.

According to the parish, the Clarksville Picnic has only been canceled once before – in 1972, due to Hurricane Agnes.

With more rain and potential flash-flooding forecasted for later that day, some volunteers began to close booths around 3 p.m. The event was initially scheduled to last from noon to 9 p.m. Still, many seemed pleased with the day’s outcome.

“Look at this,” said longtime volunteer Harriett Teixeira, waving her arm over the picnic. “People want this. They really look forward to this.”

Monsignor Joseph L. Luca, pastor of St. Louis, said he was grateful for his parishioners’ “spirit of cooperation,” he said. “For me, it was a tremendous affirmation of the community,” he said. “I thought the real character of the parish clearly showed itself in this time of adversity. It made me feel deeply, deeply proud and touched by their goodness.”

Weather experts described the storm as a “derecho,” a fast-moving, destructive thunderstorm complex.

Tom Alban, director of risk management for the Archdiocese of Baltimore, said there were nine damaged-related claims filed throughout the archdiocese. Nothing serious has been reported, he said, but a tree was down at the Shrine of the Sacred Heart in Mount Washington and another at St. Joseph on Carrollton Manor in Buckeystown.

There were also unconfirmed reports of some roof damage at St. Wenceslaus in East Baltimore, he said.

E-mails have been sent to all parishes and schools asking administrators to inspect their property, Alban said.

Resurrection of Our Lord in Laurel lost power during the storm, but it was restored by Sunday morning. Its pastor, Father Mark Bialek, opened the parish hall as a cooling center with free beverages and ice.

Laurel and nearby Maryland City were hard hit, and much of the area remains without power, he said.

Despite the damage in the area, the parish sustained little damage, Father Bialek said. The pastoral center’s roof lost some tiles in the storm, and a neighbor’s tree fell on the fence of the rectory, which is off campus.

Power loss prompted St. Elizabeth Ann Seton in Crofton to cancel weekend Masses. Our Lady of Perpetual Help in Ellicott City, St. Paul in Ellicott City, St. Lawrence Martyr in Jessup and St. John the Evangelist in Severna Park were among parishes that lost power in the storm but held scheduled Masses.

Eastern Baltimore County was among the affected areas, as both Our Lady of Mount Carmel in Essex and Our Lady Queen of Peace in Middle River were without air conditioning for July 1 Masses.

Father Kevin Mueller, pastor of Our Lady Queen of Peace, wore a stole sans chasuble at 11:15 a.m. Mass, which was celebrated without music but with several doors open for ventilation.

“The door here (to his right) is closed because otherwise, the starlings would come in,” Father Mueller said after opening the Mass. “Look on the bright side – we’re saving on the power bill.”

George Matysek and Paul McMullen contributed to this story.

To navigate a photo slideshow, click on the arrows below.